... with Vickie walking out of the TIFF box office, dejected and ticket-less.

Today was the final day of this year’s festival, and I decided to make a last-ditch effort to use up a voucher by trying to snag a ticket to Patrik, Age 1.5 (screening at 9pm). Unfortunately, even though I arrived at the completely deserted box office at 8am, I was told it was off-sale. Whaaaa... ??? How can that be?! What happened to same-day availability? Not only that, but EVERYTHING after 8pm was off-sale. Sorry, what?!

Yes, I know the same-days went on sale at 7am, but could they really have sold out ALL the tickets to ALL the nighttime movies???

For anyone who’s kept score: I paid for 35 tickets, and wound up (as of the end of todaay) only using 25... and not for lack of effort. I paid a little more than $375 (including taxes et al.) for those tickets, meaning my per-ticket price was $15. Not bad, I suppose, considering a single ticket is $20.50, but I still feel like I handed over a big chunk of money to the fest for absolutely nothing. Well, nothing except aggravation and stress (for me). 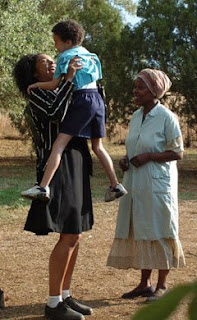 Anyway, after that early morning jaunt, I had a lot of time to kill before my first movie of the day: the apartheid-era drama Skin (5/8), which tells the true story of Sandra Laing (Sophie Okonedo), a seemingly “colored” child (based on her skin) born to two white parents (Sam Neill, Alice Krige) and thus subjected to much angst on both sides of the race war – not really accepted by either, but definitely finding an easier time of things in the black townships than, say, the all-white world in which her parents exist. The film was moving, but did feel rather manipulative and heavy-handed. It had something of a movie-of-the-week quality to it, with music cues to signal the audience to every single transition in emotion and some cheesy make-up to age the actors. And... as much as I enjoy her work, I don’t know that this is Okonedo’s best performance. It’s certainly her biggest – she carries the entire film – but I found her work kind of meh here, especially when she’s meant to be portraying Sandra as a teenager. Her South African accent also drifted in and out for the duration.

Next up was my sole Midnight Madness screening, and I have to say that even the daytime repeats of the MM films are livelier and more fun than films in just about any other program. Not sure if it’s because programmer Colin Geddes’ rampant enthusiasm is so contagious, or because the audiences for MM films are typically up for anything, but the pre- and post-film antics are often as entertaining as the movies themselves.

That was certainly the case at Sexykiller (6/8), a horror-comedy about a beautiful young woman named Barbara (Macarena Gómez), who’s like a Spanish Elle Woods with one big difference: she’s a hyper-violent, super-effective serial killer who’s picking off staff and students at a medical school. Problems arise when her new beau (unaware of her hobby) develops a device that can retrieve the final memories of people who have died... with bizarre and unexpected side effects. Bloody, violent, funny, outrageous and never taking itself seriously, the movie was a fun ride.

But even more fun was the Q&A afterwards, during which – among other shenanigans – star Macarena Gómez pulled out two fake pistols and aimed at the audience, demanding to know if we liked the film... and then honed in on some poor guy in the third row who, she said, neglected to applaud on cue. Both she and director Miguel Martí, seemed to be having an absolute blast.

I ended TIFF 2008 with Lymelife (6/8), a coming-of-age story set in Long Island, NY, in the late-1970s, amid a massive Lyme disease scare that finds characters doing things like taping their clothes shut. With a subtle The Ice Storm vibe to it, the film centers on teenage Scott (Rory Culkin) and the assorted dysfunctional relationships that surround him, including the decaying marriage of his parents (Alec Baldwin and Jill Hennessy), the equally troubled union of their neighbors (Timothy Hutton and Cynthia Nixon), and his own budding romance with their daughter (Emma Roberts). In a nice bit of casting, Kieran Culkin co-stars as Scott’s older brother. Well laid out, and told via some solid performances, the film worked for me on most levels, but it did feel like a story I’ve seen before. Just, you know, with more ticks.

And something interesting happened during the Q&A with director Derick Martini. Generally, post-film discussions involve audience members asking questions, offering positive feedback or blatantly kissing the asses of the folks onstage (believe me, I have heard lavish, lengthy, gooey praise heaped upon directors or actors in somewhat embarrassing ways before). But tonight, one woman stood up and said she didn’t like the ending. She qualified her comment by saying that she loved the film and thought it was beautiful, but that she didn’t care at all for how it ended.

Based on how some people in the audience turned on her, you would think she’d said she thought Martini was a talentless hack and that his film was a steaming pile of poo. Good grief, people, not everyone is going to love a movie... and God bless this woman for at least having the courage to stand up and make a comment that isn’t 100% overflowing with praise! Nevermind that she repeated that she loved the movie. Yes, she did go on for longer than she probably should have, but she was just being honest. Apparently, that’s somehow considered poor form, though I don’t see why.

And then... my festival was over. When I went home, it was grey and rainy and very humid out, and I still had 10 vouchers left. Ah well. I’ll post my final TIFF thoughts tomorrow, but in the meantime you can read about which films won which awards at a ceremony earlier today.