101 Dalmatians is what I consider to be one of Disney’s Dodgy Classics.
By Jenniferon February 8, 2014
0 Comments
Our Rating 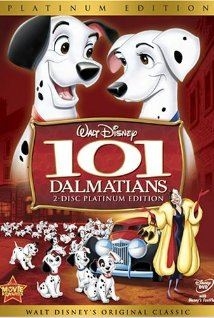 101 Dalmatians is what I consider to be one of Disney’s Dodgy Classics. It’s cute and familiar, but it doesn’t have the substance of the Classic Classics, which offer up catchy songs, complex characters, and memorable storylines. Having said that, the Platinum Edition of any Disney film is definitely worth writing home about.

Our story begins when Pongo, a clever Dalmatian, spots a cute lady Dalmatian and a cute lady human walking down the street. He drags his owner to the park where the girls are, and before you know it, everyone’s in love! The two humans (Roger and Anita) get married, and within a few months, Pongo and his girl are expecting. A whopping fifteen pups are born to the proud parents, and it would be happily ever after if not for the horrible, evil Cruella De Vil.

Freakishly, Cruella De Vil is an old classmate of Anita’s who continues to pay her social visits, even though she’s clearly an awful person. Now why would a nice girl like Anita have anything to do with a hag like that? Nevertheless, Cruella keeps popping by, and she’s got her eye on the puppies. When Roger and Anita decide not to sell her a pup, Cruella goes all crazy and orchestrates a dog-napping.

While the humans cry into their handkerchiefs, the local animals rally together to plan a rescue. From an adult perspective, this part of the movie drags on a bit, and I could have done without the all howling as the dogs alerted one another of the situation. Ultimately the animals locate the pups they’re looking for and discover that Cruella has amassed 101 Dalmatians! Not only that, she’s planning to make them into fur coats! Noooo! After a great escape, all 101 dogs return to live with Roger and Anita, and they (finally) live happily ever after.

Little kids will most certainly enjoy this beloved feature, and the puppies themselves are so cute you just want to eat them up… in a totally figurative, non-carnivorous way. Just seeing one of the pups put his little paws up to the television and watch a show is enough to sell the movie, but the real kicker is all the extra features.

There are music videos and interactive games for the kids, pop-up trivia facts and deleted songs, plus a whole slew of making-of material for the whole family to enjoy (including a segment on the correspondence between Walt Disney and 101 Dalmatians author Dodie Smith). For anyone offended by the amount of smoking that goes on in the movie, there’s even a thoughtful referral to a stop-smoking organization! This two-disc edition offers a satisfying combination of old and new material, and if you remember this movie fondly, it’s a worthy addition to your Disney collection.