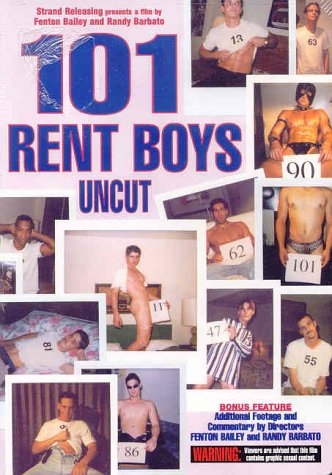 We all see them, hustlers, and ultimately end up looking the other way. Have you ever stopped to talk to any of them? The difference between them and us, most of us anyway, is that we choose to sell ourselves to companies for a price rather than to individuals who want specific services. Obviously, the safest bet would be to get a legitimate job, but some choose an alternative lifestyle for one reason or another.

The filmmakers paid 101 male prostitutes $50.00 each to tell their stories on film. What this documentary tried to do was to expose these guys as real people with everyday feelings and everyday concerns. It’s strange to believe, but they are ordinary people who are just trying to survive in this world as the rest of us are.

The film is edited in such a way that, in each of the interviews, the same questions were asked and the resulting answers were spliced together. The questions ranged from “How much do you charge?” to “What was the most outrageous thing a trick wanted done?” The answers given ranged from the humble to the obscure. One of the most common threads between these guys is that they all started having sex for money at an early age. Some of them were as young as 13! Now we have to look around us to see what would make a kid do such a thing.

The ranges of experiences that these guys have had are as diverse as anything else out there. Some of them seem to truly enjoy what they do and some of them don’t see any other way around it. Some of them make $200 a week turning tricks, others make much more, and there are some that make much less. I guess it all depends on the demand for a certain type. Either way, each of these guys has a separate story to tell.

As with many documentaries, the film is meant to shed light on the subject. It’s meant to enlighten us to the reality of these guys’ reality. Some of the stories are heartbreaking and some of them leave you flat. I’m not sure that I would recommend this film to everyone, just those who are intrigued by the topic. The film is done well and has some good insights into the life, but in a couple of instances they may have given us a bit more information than we needed to know. This is in reference to one guy demonstrating how much he enjoys pain.   I’ll let your imaginations run with that…