If you could believe that a life of broken dreams could turn Zac Efron into Matthew Perry, you may find 17 Again to be a cute enough diversion.
By Lindaon February 8, 2014
0 Comments
Our Rating 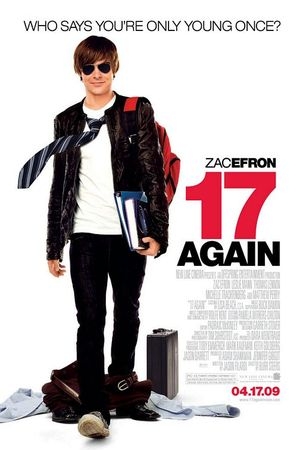 17 Again wastes no time appeasing its target audience: In the opening sequence, we get to see Zac Efron shirtless (six-pack gleaming with sweat), shooting baskets with ease, smiling his dreamboat smile, dancing with the cheerleaders, and furrowing his brow with concern over a girl. Swooooon. He is sooooo CUTE! I mean, really. He really is.

Which makes it all the more jarring that the Zac Efron character is played as a 20-years-later adult by Matthew Perry. Without getting into criticism of physical looks (because it is mean), I can just say that the only physical similarities between Efron and Perry are that they are white men and have brown hair. Is that really the best that the casting agents could do? I mean, really.

Matthew Perry’s Mike O’Connell is in his late-30s, and has split with his wife (and mother of his two teenage kids) who was his high-school sweetheart. Mike is a bitter man who can’t even make it to middle management at his company. His life has been wasted, he thinks—all his potential flew out the window when, as a 17-year-old, he decided to propose to his pregnant girlfriend rather than shoot for a basketball scholarship. Well, boo-hoo, take some responsibility, kid. Oh, but since he is forlorn and this is a movie, Mike does get his second chance when he comes across a completely peripheral and undeveloped character in the guise of the high school janitor. Via a convoluted falling-off-a-bridge-into-a-wormhole scene, Mike is granted his wish to be 17 Again. Poof! Mike wakes up in his 17-year-old body, which happens to be much much hotter than his 30-something self.

Mike, now played by (did I say super-cute?) Zac Efron is not in his past, but actually his present. If you got the chance to be young again, the film asks, would you do things different? It makes it a little trickier when everyone around you from your real life is still the same age. Mike is now a peer of his kids, picked-on Alex (Sterling Knight) and bad-girl-in-training Maggie (Michelle Trachtenberg) and quickly figures out how to navigate into their lives as the long-lost kid of their dad’s best friend, rich nerd Ned (Thomas Lennon). But Mike’s estranged wife Scarlett (Leslie Mann) is still an adult, and teenage Mike is still in love with her. AWKWARD.

17 Again gets its PG-13 rating, I suppose, because of this awkward and funny sexual tension thrown into the mix. Scarlett sees this strange new kid that is hanging around as looking exactly like her husband as a teen, but just finds his attraction to her as a phase of him being attracted to a “mother I’d like to… whatever…” Mike gets the opportunity to lurk into his family’s lives from a different perspective, like spying on them, but not really. When he gets the chance, he shows up like an angelic version of himself to share wisdom with his kids and praise his wife (in a 17-year-old stalker way) that he never did as an adult. Will he redeem himself to his family? Will he make different choices that will change his life? What do you think?

Though 17 Again offers nothing new to the age-switcheroo genre of movies like Big, 13 Going on 30, or Freaky Friday, it is watchable due to the surprisingly game cast, grumpy Matthew Perry notwithstanding. Leslie Mann has a sympathetic depth as a woman who is fed up with her husband, but is moving on rather unwillingly. Thomas Lennon as Ned, and the always-fab Melora Hardin as the high school principal he has a crush on have over-the-top scenes of courtship that still manage to be funny. And then there’s Zac Efron. Did I say he’s cute? The ridiculously appealing actor works his squeaky-clean appeal and even manages to cry on cue during a climactic emotional moment. I don’t blame Leslie Mann for wanting (just for a second) to jump into his 17-year-old arms. But just for a second… that is, until your brain screams, “Inappropriate!!!”

The single-disc DVD of 17 Again offers, get this, not a single extra! There are however a bunch of random trailers, and audiences may want to pause and gaze into Zac Efron’s baby blues in the trailer for Me and Orson Welles, co-starring Claire Danes. (In the meantime, though, you can play the 17 Again MASH Game and find out who you’ll be living happily ever after with! OMG!)