If this movie had been made 10 years ago, it would have starred Sandra Bullock and Matthew McConaughey, and would have complemented Bullock’s rom-com film roster quite nicely. Why? Because it’s exactly the sort of inconsequential but pleasing cinematic fluff that makes for very pleasant but not overwhelmingly great viewing.
By Vickieon February 8, 2014
0 Comments
Our Rating 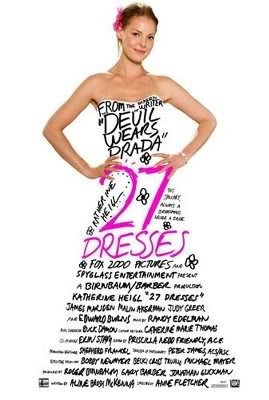 27 Dresses taps current Hollywood It Girl Katherine Heigl to star as Jane, a perpetual bridesmaid, who lurrrrrrrrrrrrrves weddings and has been in a whopping 27 ceremonies. But Jane’s so busy helping everyone else with their special days that she completely forgets to get a personal life of her own, choosing instead to while away the hours pining for her dull-as-dishwater boss, George (Edwards Burns, who’s as interesting as a bowl of mayonnaise). Not surprisingly for a script like this, George has no clue Jane has feelings for him…which smarts all the more when he falls for her flaky, phony younger sister, Tess (Malin Akerman). All the while, Jane is pestered by a charming, roguish columnist named Kevin (James Marsden), who covers weddings for the NY Journal and finds Jane’s situation compelling enough to write about (without her knowledge, of course).

Now, anyone who’s ever seen a romantic comedy before will be able to predict, with startling accuracy, every plot point as it unfolds. It’s not a complex story, and it follows the oft-used blueprint of countless girl-lookin’-for-love-in-all-the-wrong-places chick flicks before it. You know with whom Jane really belongs, you know which supporting players will hook up, and you can almost telegraph the ending from about 10 minutes in.

Nonetheless, the fact that the movie actually works on some level is due largely to Heigl, who sells the s**t out it. She makes for a great gal next door, and she’s equal parts hot and hapless – when she cries, you feel for her; when she’s goofy, it seems naturally goofy (Hilary Swank, take note, please). I bought it, and I bought her. Marsden is ridiculously handsome and charming, and makes for an entertaining antagonist. Kevin pesters and needles Jane in a way that only ever really works in fiction, but it’s still fun to watch. Equally fun is Judy Greer, who’s created a best-friend niche all her own in Hollywood and who scores again as Jane’s bitter, sarcastic and always slightly drunk pal, Casey. Oh, and again, in case I didn’t make myself clear earlier: Edward Burns is BORING. Wooden. Stiff. Bad. Just bad. How anyone, let alone someone as great as Jane, could fall for George is a mystery worthy of a film of its own.

Make no mistake, 27 Dresses is a totally pre-fab, paint-by-numbers movie that will no doubt play endlessly on TBS, but it’s also as harmless and tasty as a big wad of fondant icing, so go ahead and indulge.