Rather than being a grim cancer movie, 50/50 is really a twenty-something buddy movie that happens to deal with a really heavy subject.
By Lindaon April 11, 2013
0 Comments
Our Rating 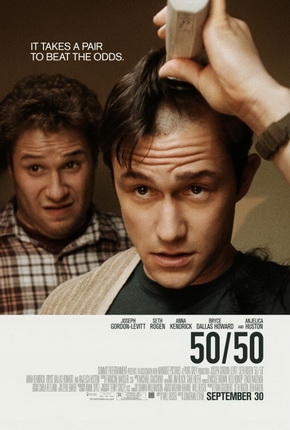 When you are in your 20s, life should be carefree. You can work at a hip company, where your childhood best friend works in the cubicle next to you. You can be dating a hot girl or guy, where the relationship is still in the sweet, awkward, “Um… I emptied a drawer for you…” phase. You should be at your physical peak, going for a run through the downtown streets or down through the park.

That is life for Adam (Joseph Gordon-Levitt) until some nagging back pain causes him to go to the doctor for a checkup. The doctor avoids eye contact as he lists off a grocery list of “not goods”. Adam has cancer.

Adam is given a “50/50” chance for survival. As his buddy Kyle (Seth Rogen) says, those odds would be great if he were a casino. But Adam is in kind of a daze as his hot girlfriend (Bryce Dallas Howard) flees (it is too early in the relationship for her to deal with a sick boyfriend) and he is given a “farewell” party at his job, with coworkers pretty much wish him the best in his afterlife. Cancer was the last thing on Adam’s mind when he got the diagnosis, and his life is turned upside-down trying to process what is happening to him.

Rather than being a grim cancer movie, 50/50 is really a twenty-something buddy movie that happens to deal with a really heavy subject. While going through chemo, Adam meets and bonds with a couple of genial older guys also going through treatment. Their story (and movie) would be completely different that Adam’s story. In this one, Kyle tries to keep things as light and normal for his best friend, encouraging him to go out and get laid by playing the “cancer card” for sympathy.

Adam lives alone, and is reluctant to accept help from his pestering mother (Anjelica Huston), even when his girlfriend bails. But as his health declines, his attitude and perspective change. That’s when 50/50‘s laid-back attitude suddenly surprises you by wringing out some real emotion.

This isn’t a cancer movie that will have you sob from beginning to end (thank goodness). Joseph Gordon-Levitt is a sweet, almost passive lead, and he is surround by an excellent supporting cast. Anna Kendrick is an earnest and quite young therapist trying to offer by-the-book advice, misstepping her way through their sessions until she eventually gains Adam’s trust and friendship. Anjelica Huston gets only a few scenes, but brings it at the end, when her son—and the audience, for that matter—really need her. Rogen’s Kyle is boorish and obnoxious, but you have to give him perks for sticking with his buddy. If anyone has Adam’s back through the story, it is Kyle.

Don’t expect Terms of Endearment (even though it is jokingly referenced) going in to 50/50. This is another take on a disease that really, really sucks. Expect to laugh, and expect to cry. And when it is over, you may want to call your best friend and meet for a beer. 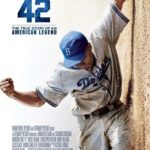