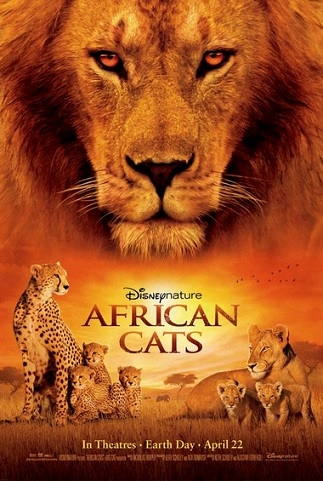 Narrated by Samuel L. Jackson and shot over more than two years at the Masai Mara National Reserve in Kenya, the film trains its lens on a number of feline inhabitants and their adorable-with-a-capital-A offspring. There’s Sita the cheetah and her five tiny cubs, who live a fairly isolated existence; Layla the aging lioness, who has a fuzzy daughter named Mara but struggles to maintain her position in the pride hierarchy – a problem also faced by battle-scarred male lion, Fang, who spends the entire movie with a big, broken tooth hanging from his mouth; and a quintet of menacing male lions, led by a fighter named Kali, who threaten all the big cats listed above.

What unfolds is a story of survival of the fittest and fastest, with a “power of a mother’s love”  narrative that centers all the action around Sita and Layla. We watch as the assorted cubs grow and learn amid the changing seasons and the accompanying migratory-pattern changes of the animals on which they prey. There’s infighting amongst the prides and inter-species conflict, both of which serve to heighten the tension. And predators always seem to be lurking in the shadows, turning some of the cubs’ stumbly bumbly play into a nail-biting exercise in courting danger.

For all the engaging characters – and, make no mistake, the filmmakers have very clearly turned their wild cast of Reserve inhabitants into decidedly humanized characters, completed with (projected) human emotions explained to us in Jackson’s occasionally over-theatrical narration – elements of the film feel very much massaged to perhaps create a more exciting, dramatic story. Did I believe that Layla was having an existential crisis over her future, or that Kali and his sons had plotted their violent takeover like soldiers planning a military operation? Not really. But the narration tells me stuff like that was playing out in the minds of the cheetahs and lions I was watching.

The music choices were simultaneously effective and distracting at times. On occasion, a sequence that could easy be a scene of two lions playing becomes, with the right chest-shaking chords, a scene of two lions fighting. And vice versa. Similarly, sad, woeful strains made otherwise less powerful scenes much more heart-tugging. Yes, I cried.

All that said, African Cats tips its hat – in the best way – to the nature films Disney put out in the 1960s. It’s geared toward a younger audience and delivered in a family-friendly way so as to be fun and exciting for kids, and pretty to look at for the grown-ups. The cinematography is stunning and, overall, the film serves as another Disneynature reminder of the beauty and wonder of the natural world.