The movie draws you in with no expectations, then leaves you gobsmacked at how good it is. 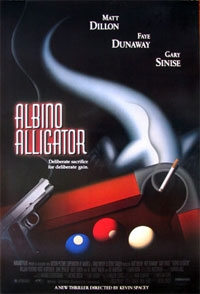 It’s important to explain this, because titling a film Albino Alligator is about as brilliant as calling your gift a white elephant. Maybe your gift is a beautiful porcelain white elephant, but nobody’s going to open it and find out because they’re expecting something weird. Similarly, it doesn’t seem that many people have bothered to unwrap Albino Alligator. I know I avoided it because I anticipated glimpsing a certain white reptile, and I really didn’t want to.

Well, I’m here to set the record straight. The albino alligator is just a metaphor. There are no four-legged creatures of any sort in this movie. Also, Albino Alligator is quite good. Why wouldn’t it be? It was directed by Kevin Spacey, and stars Matt Dillon, Gary Sinise, Faye Dunaway, Skeet Ulrich, Joe Mantegna, and William Fichtner who plays a sociopath so well that you’d almost believe they returned him to the penitentiary at the end of shooting each day. Oh, and did I mention that Viggo Mortensen also stars in this film? Well you caught me. He’s the real reason I finally gave this movie a chance.

In the tradition of Dog Day Afternoon, the majority of Albino Alligator takes place in a confined space over a relatively short period of time. Three thieves (Dillon, Sinise, and Fichtner) attempt to hide in a speakeasy-turned-bar, but soon the establishment is surrounded by police and a hostage situation develops. An intense evening full of unexpected twists follows, but to reveal more would spoil the movie.

It is safe to say that Albino Alligator is a tautly written film with a cast that delivers fine performances all around. Matt Dillon still has his heartthrob looks and offers up a dynamic, emotionally complex performance. The fact that he’s so underrated will always be a puzzle to me. An injured Gary Sinise gimps around throughout the movie, but thankfully doesn’t give us Lieutenant Dan all over again. Joe Mantegna is downright funny, and the stunning Faye Dunaway also does a commendable job.

Ah yes, and then there’s Viggo. He sports a pencil thin moustache and a peculiar accent that I couldn’t quite put my finger on. I think it was supposed to be French Canadian, but his character is one slippery fish. There’s almost a comical Jon Lovitz vibe to the character, yet nothing about him disrupts the serious tone of the film. Pulling that off requires no small amount of genius, and this film is the perfect venue for one of Viggo’s subtly quirky characters.

Perhaps the title is more clever that I realized. The movie draws you in with no expectations, then leaves you gobsmacked at how good it is. Not a bad strategy after all.