At a certain point, I think I gave up and just assumed that I’d be watching Alexander forever.
By Jenniferon February 8, 2014
0 Comments
Our Rating 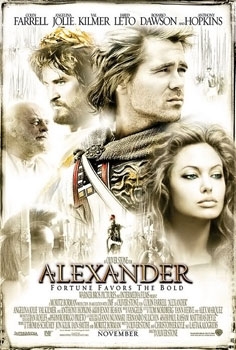 Wait a minute, nobody around here has reviewed Alexander yet?  Not one of us rushed right out to see Oliver Stone’s epic masterpiece?  No one even wanted to see Colin Farrell’s bits and pieces on the big screen?  Huh.  I guess it’s up to me to explain how Alexander both succeeds and falls flat, creating a movie that is absolutely neither here nor there.

As a blonde Alexander the Great, Colin Farrell is unconvincing.  As demonstrated in The Recruit, he’s perfect for those moments of self-doubt and confusion that every leader experiences from time to time, but he lacks the depth and the confidence to portray a commanding and charismatic figure.  The role really demands a more complicated actor—where is Joaquin Phoenix when we need him?

Then there’s Angelina Jolie as Alexander’s nut-bar mother.  I never really figured out what’s wrong with her, although she really likes snakes, believes Zeus is Alexander’s father, and has a perversely controlling relationship with her son.  Val Kilmer plays Philip, Alexander’s actual father, and he not even remotely interesting.  He keeps telling Alexander that women are far more dangerous than men, so it’s no surprise that Alexander winds up with some rather complicated personal relationships.  Here you can throw in Rosario Dawson as his way-too-naked wife, and Jared Leto as his best friend/lover.

Anthony Hopkins is a pleasant narrator as Old Ptolemy, but he’s so subdued that there’s not much to get excited about.  For me, the highlight (unsurprisingly) is Christopher Plummer as Aristotle.  Sporting a toga, he tells a nifty little story about frogs needing to leave their frog ponds.  This, of course, becomes a metaphor for Alexander leading his troops out of Macedonia to conquer, then unify the Persian Empire…or something.  I missed some of the finer historical points after Aristotle left the screen and my mind glazed over.

Throughout the film there were moments that would suddenly strike me, like the image of a horse and an elephant face to face, rearing up at each other, and I would be sorry that I wasn’t paying better attention.  Then my mind would start to wander all over again.  Despite the fact that all Alexander has to do is grow up and take over the world, the chronology is all out of sequence, and this prevents the story from building momentum.  It didn’t help knowing that I had 176 minutes to go before the end.  At a certain point, I think I gave up and just assumed that I’d be watching Alexander forever.  When the movie started wrapping up, you could have knocked me over with a feather.

There are also a few flaws that bear mentioning.  Why do a bunch of people from the same region have wildly different accents?  Isn’t it odd that Alexander himself has a faint, but distinct Irish brogue?  Was roughly one fifth of the population really missing an eye during this era, or does Oliver Stone just like disfiguring eye injuries?  (Don’t forget the eyeball laying on the playing field in Any Given Sunday.)  Wait, why is Angelina Jolie playing Colin Farrell’s mother?  Aren’t they, like, the same age?  I’m sure the C&C Music Factory would call these anomalies “things that make you go hmmm.”  In the end, that’s about all this movie made me do.

Oliver just couldn’t leave it alone. Less than three years after the film made its theatrical debut (to many boos and jeers), the director comes back to tweak Alexander AGAIN with what I like to call the This Time for Real Cut. Adding another 30 minutes, with Stone promising “there is no more footage to be found,” supposedly this version is the epic he always imagined it would be.

The back of the box says this 214-minute version now had a more “evocative sexuality,” which to me meant that we would finally get to see Colin Farrell and Jared Leto rub their creamy thighs together. Well, here’s the scoop: I sat through 3 1/2 hours of bluster and ego and gory battle sequences to report that the homosexuality in this Final Cut is so tame that it would make it onto network TV (OK, except where you see Colin drop his robe to immediately hop under the covers… yes, there are some silhouetted bits and pieces to be had). The most explicitly gay moment is a soft kiss between Alexander and his pretty eunuch, plus, of course, a male-rape by Philip (Val Kilmer) to an unsuspecting minion. I honestly think that that is as far as Oliver’s imagination goes. It takes raised-by-wolves Rosario Dawson’s feral character to get any actual thrusting action from the man with the bad blond wig.

Not having seen either of the other cuts of Alexander, it is difficult for me to compare them all. The plot still jumps around (“9 years earlier,” “10 years later,” “3 years earlier”) leaving my friend and I to push Pause and get out our felt-tip markers and ruler to make a time line on butcher paper. There is a huge bloody battle sequence at the beginning, which I’ve heard is an editing improvement over a bloatedly talky original beginning (now all the bloated talky part comes right after). And there is the usual unsubtle symbolism that Stone likes to thwap you over the head with repeatedly. Ooooh… Angelina likes snakes. A lot. She must be… manipulative? And, indeed, what’s up with her gypsy fortune-teller accent?

Alexander, in any form, is not exactly boring I suppose. I don’t change Jennifer’s original rating of the Director’s Cut for this supposedly improved Final Cut. But let’s just say, watch the movie with a friend so that you can make snarky commentary during the film. Watch it alone, and you might just have to drink a lot of caffeine to get through it.