A big, fat “meh” goes to this incredibly disappointing comedy. 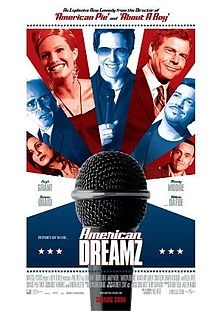 Given the pedigree of its filmmaking team (About a Boy, In Good Company), I had high hopes for this satire of American pop culture and, more specifically, American Idol. But what I watched was a sad mish-mash of tone and execution, where the film veered back and forth between a Jerry Zucker-esque all-out spoof, a biting satire and, worst of all, a drippy feel-good story. Had they stuck to just one of those genres and milked it for all it’s worth, the movie might have worked much better. But they didn’t, and it doesn’t.

Mandy Moore stars as Sally Kendoo, a girl who dreams of being a star and who lands a spot on the TV musical-reality series, American Dreamz, in the hopes of becoming a singing sensation. The show is produced and hosted by a bitter Brit named Martin Tweed (Hugh Grant), who’s more interested in ratings than finding the next breakout talent. Mark that down as story #1.

While this is going on, the dim-witted U.S. president (Dennis Quaid) is struggling with dismal approval ratings. His wife (a horribly underused Marcia Gay Harden) and the gung-ho VP (Willem Dafoe, the film’s saving grace), try to figure out a way to boost his popularity. Bingo! Get him to appear on American Dreamz as a guest judge! The kids love that show! That’s story #2.

Somewhere in Afghanistan, a bumbling young terrorist recruit named Omer (Sam Golzari) is essentially booted from his training camp and sent to live in California with his relatives. There, he gets to pursue his love of Broadway musicals and is accidentally discovered by a pair of Dreamz producers (John Cho, Judy Greer), who promptly sign him to the show. That, friends, is story #3.

All three stories converge exactly as you’d expect, with the all-American Sally and the Middle East import Omer becoming diametrically opposed media darlings, all to the delight of Tweed, who watches his show soar in the Neilsen market. Thing is, the entire film is just kind of…flat. It’s not sharp enough to work as a cutting satire – Sally needs to be MUCH more conniving and manipulative (see: Election’s Tracy Flick) if that were the case. The pratfalls and overt parodies aren’t terribly funny or original, and smack of leftover sketches from a bad day at the SNL studios, so scratch the spoof angle. And amid these dueling humors sits the slight but still-present feel-good undertone that the filmmakers try to keep at a minimum…but it’s not minimum enough.

It feels a bit like everyone is playing it on the safe side. Yes, there’s some politically incorrect humor and dark humor and dark, politically incorrect humor, but it’s really pretty mild…as if no one wanted to push the boundary a little further. Moore’s Sally is too average, Grant’s Tweed is too boring and Golzari’s Omer is too much like Bambi with his wide-eyed innocence and good, wholesome heart. C’mon! Shake things up a little! Even Tony Yalda performance, as Omer’s bitchy, über-fey cousin, is a complete rip-off of Sean Hayes’ Jack McFarlane character from Will & Grace.

There are small gems sprinkled here and there. A cameo by Carmen Electra, Seth Meyers as Sally’s enterprising agent and the wonderful Shoreh Agdashloo as Omer’s wealthy aunt are a few standouts. But overall, the movie lacked oomph and never drew me in. Ironically, the screening was on a Wednesday night, and I was actually more anxious to get home to see the American Idol results show than I was to sit through any more of this film.