Did you know that Stiffler had a little brother? No? No mention of him in the other movies? Doesn’t matter, because now he does. 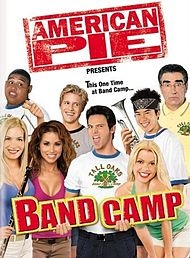 Let me just start off by saying that in the original American Pie movie, the line uttered by Willow, “This one time? At Band Camp?” was funnier than anything in this straight-to-video franchise “sequel” to the American Pie series. Gone are almost all of the original characters, except poor Eugene Levy (who I hope got a big fat check for his rehash eyebrow-wiggling appearance here), and the “Sherminator” (Chris Owen), in a cameo as the high school counselor that gets the whole ball rolling.

Did you know that Stiffler had a little brother? No? No mention of him in the other movies? Doesn’t matter, because now he does. His name is Matt (Tad Hilgenbrink, who has perfected his dead-on aping of Seann William Scott’s smarmy sneer), and he is upholding his brother Steve’s reputation. For someone who does not even appear in flashback in the film, Steve Stiffler is practically a major character, as Matt aspires to not only be like his brother in his exploits, but, of course, one-up him.

Matt gets in trouble for sabotaging the nerdy school Band’s performance at graduation, so Counselor Sherman sends him to Band Camp as punishment. The dorky Band kids are people, too! In fact they are not only smart, but are horndogs like everyone else! Matt, pleased with the revelation that the Band kids have boobs and bits like everyone else, sets in motion a high-tech plan to secretly tape the Band’s boobs-n’-bits and make the ultimate “Band Kids Gone Wild” video (just like his apparently successful smut-peddling brother!). But will Matt gain a conscience by the end of summer? Will he make out with one of the Band girls and maybe even like her? Will the Band kids accept swaggering asshole Matt as one of their own? Do we care?

The thing is, you can tell that money was poured into this film. The kids aren’t necessarily bad actors, and the production was big-screen quality. The filmmakers had nothing to lose, really. A million people apparently bought this DVD the first week, based on brand-recognition alone. And you know what? Those customers probably got their money’s worth. I couldn’t help but be reminded of the long-time film reviewer for my city’s biggest newspaper retiring after 20-some years because for every good film he saw, he had to sit through 20 movies like Band Camp. Believe me, I nodded my head knowingly at his words. So can you blame me for skipping the DVD extras?