The difference between teen sex comedies now versus, say, 15 years ago, is that they can get away with a lot more. 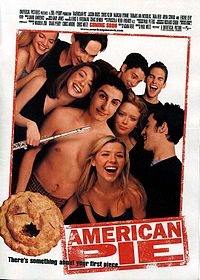 Not to be bitter or anything (as I grumble, “Goddamn kids these days…” and bang my cane on the floor), but I don’t think that the teenage movies of my generation sucked as much as they do now. OK, the Porky‘s movies sucked, but other than, say, Clueless or Election, has there really been any great teenage flicks since they heyday of the John Hughes trilogy of Sixteen Candles, The Breakfast Club, and Pretty in Pink?

American Pie sure seems to be the teen film of this era that kids these days will remember, since it made so freakin’ much money at the box-office. It has all the formulas of a high school classic: cute leads obsessed with sex (having it, or not having it, as the case may be), an exchange student, a raucous party or two, and of course the prom as climax (in more ways than one). But the film is… bland.

The difference between teen sex comedies now versus, say, 15 years ago, is that they can get away with a lot more. Note the infamous havoc that one of the boys wreaks on a freshly made apple pie (if you haven’t seen this in previews, well, I’ll leave it to your imagination). The humor is definitely a lot cruder in a way that made me wistfully nostalgic for the simplicity of Long Duk Dong saying, “Whas’a-happenin’, hot stuff?” or a young Joan Cusack clinking her neck brace on a drinking fountain in Sixteen Candles.

American Pie does have a few redeeming qualities: Chris Klein as a jock who falls for a goody-goody choir girl, is actually quite endearing. Alyson Hannigan (Willow, in TV’s “Buffy the Vampire Slayer”) earns some good chuckles as a nympho nerd girl from Band. And Pie‘s foreign exchange student subplot is actually pretty funny, as Natasha “from Czechoslovakia” (has anyone read the papers in the last 10 years?) gets the better of the nerd boys trying to catch her naked on a live internet cam.

But overall, American Pie is pretty disappointing. If this is the best that hit teen movies of today can offer, I suggest that viewers dig around in the John Hughes classics bin instead.