Yep, this movie gave me a nightmare after I saw it. 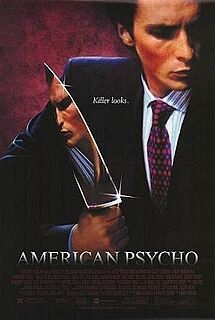 The night I rented American Psycho with a friend, we had just been talking about the last time a movie gave us nightmares. For me it had been the movie Jurassic Park. I was embarrassed to say that the night I saw it, I dreamt I was running down a dark muddy road with scary dinosaurs chasing me. I woke up in a terrified sweat. “But,” I said proudly, “that was the last time any movie gave me bad dreams!” So of course after watching American Psycho I ended up having a nightmare about Christian Bale coming after me, breaking into my apartment with an axe or something. Sheesh.

But, you see, for the most part American Psycho is a parody. It is actually quite a funny movie with moments of comic brilliance. 1987, New York City: Young obnoxious businessmen compare their suit brands and flaunt the fonts and textures of their new business cards while eating at swank scenester restaurants. It’s right out of the “greed is good” era of the movie Wall Street… except now that we are looking back on the era, we can laugh at it all (while we cringe).

Patrick Bateman (Bale) is one of the more despicable characters to come across movie screens in a long time. He’s pretentious, materialistic, rich, and beautiful. He pretty much hates everybody, even while he charms them. Turns out he has a bit of a habit that he has a hard time controlling lately: murdering people for fun. “You seem really sweet,” says a pretty blonde he meets at a party. Quick edit to her head in a plastic bag in Patrick’s refrigerator. Eeek.

For the most part, it is all presented over-the-top. Bale plays Bateman with a smarmy, exaggerated newscaster accent, his scowls of jealousy are cartoonish, and even his sculpted body is so cut that it is somewhat unreal. But when this naked, blood-splattered super-man is running after a prostitute with a chainsaw, well, I couldn’t help but be a bit uncomfortable. The fun starts to peter-out as he kills and kills and kills. After awhile I wasn’t really sure what the point was anymore, as I watched those scenes through squinted eyes.

American Psycho is pretty gory. It’s a splatterfest with a sense of humor, but it IS a splatterfest! It’s worth the rental, however, just to hear Patrick’s pre-murder monologues about the musical brilliance of such 80s pop music superstars such as Phil Collins and Huey Lewis and the News. If you can stomach lots of implied ultraviolence, it is just about worth a rental for the social commentary of 80s excess. But, alas (as my nightmares can attest to), American Psycho sure isn’t for everyone.