The movie can be a bit slow and serious, but it’s interesting nonetheless. 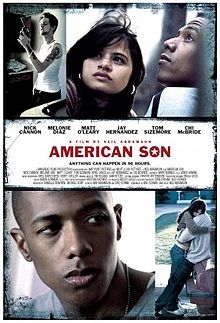 American Son is a timely, thoughtful indie film about a young man named Mike (Nick Cannon) who is about to be deployed to Iraq.  Only a four-day Thanksgiving holiday stands between him and the scariest undertaking of his life, so Mike catches a bus to Bakersfield to spend time with his family and friends.  With serious questions about mortality and the meaning of life weighing heavy on his mind, Mike keeps the news about his deployment to himself and spends the following days taking in life as he knew it.  As much as he dreads and fears leaving it behind, he begins to see that staying put might not be a better alternative.

Though Mike is greeted warmly by his adoring little sister, he’s not exactly thrilled at the sight of his hapless stepfather (Tom Sizemore).  Mike’s mother also welcomes him with open arms, but she bears heavy news about his deadbeat brother.  Mike is her one remaining shot at having a successful son, and this responsibility is not lost on him.  He owes it to himself and to his family to make something of his life, and from the look of his friends, Bakersfield is not the place to do it.

Mike’s friends are thrilled to have him back in the fold, and have all sorts of plans for the next few days, most of which include getting high, getting drunk, or getting laid…with a few drag races thrown in for good measure.  There’s a good chance that Mike will be injured or killed in Iraq, but is that chance really any less if he stays in his old neighborhood?

With these unpleasant realities staring him in the face, Mike finds comfort in the company of Cristina.  Her calming presence seems to soothe him, and she takes him to speak to her neighbor who has just returned home from Iraq.  She is both a pleasant distraction and an anchor in the storm, but the fact remains that they cannot be together–at least not yet.

By the end of the four day holiday, Mike has both confessed the news of his deployment and come to terms with it.  The immediate future may look fairly terrifying, but he has more direction just about anyone he knows.  As long as he survives combat (and he probably will), Mike has an excellent chance of being the most successful member of his family and his peer group.  Given the fact that so many people see military service as an unnecessary risk and a potential waste of life, American Son goes a long way to present an alternative point of view.  The movie can be a bit slow and serious, but it’s interesting nonetheless.