It’s woefully, painfully b-o-r-i-n-g. Sound familiar? Maybe that’s because every criticism I had for the big-screen adaptation of The Da Vinci Code holds true once again. 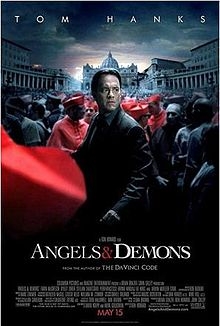 As the closing credits rolled on director Ron Howard’s follow-up/prequel to The Da Vinci Code, my movie-going pal leaned over to me, pointed at the screen and said, “Know what its new title should be? Angels & Dramamine.” Because, folks, the biggest sin committed in this film about the Vatican, the Illuminati and the murdering of Cardinals is that it is woefully, painfully b-o-r-i-n-g.

Sound familiar? Maybe that’s because every criticism I had for the big-screen adaptation of The Da Vinci Code holds true once again. Honestly, I sort of feel like just reprinting my previous review and simply swapping out titles, cast members and conspiracy theories.

Tom Hanks steps back into a horrible hairpiece to reprise his role as dreadfully dull professor Robert Langdon, who’s tapped by the Swiss Guard to help avert disaster after the death of the most recent Pope. Seems the Illuminati, the secret science-loving society driven underground by religion, has decided to use the occasion to exact revenge (upon the Church that condemned them) by unleashing mass havoc via a stolen vial of anti-matter. To add a little color to their efforts, they’ve also kidnapped the four top candidates next in line for the Papacy and have promised to publicly execute each one.

Now, you’d think this would be enough to get the collective audience adrenaline pumping, but it does not. Langdon teams with the comely Italian scientist (Ayelet Zurer, in a completely bland and pointless role) responsible for the creation of the anti-matter to try to rescue the Cardinals, reclaim the deadly “God particle” (which would obliterate Vatican City in one fell swoop if unleashed) and cope with the raspy nay-saying of the highly skeptical commander of the Swiss Guard (Stellan Skarsgård)… whose entire purpose in the story is to repeatedly dig in his heels for no logical reason, save for slowing the progress so that the running time is a mind-numbing 138 minutes.

Like its cinematic predecessor, this film plods along and literally consists of little more than Langdon running from historic site to historic site, spouting pages of complex factoids and then repeating some variation of “hurry, let’s go there!” before he and his crew sprint to the next location where the entire scenario unfolds again. It’s no fun for the viewer when you’re essentially watching an endless history lesson onscreen, with no chance to figure out plot points on one’s own. It’s the show vs. tell debate – and, in this instance, the film is nothing but tell. (As an aside, you may want to peruse this guide to how a Pope is elected in order to begin to possess the knowledge the filmmakers clearly assume the audience already possesses.) After a while, it becomes like a haze of Italian gibberish, made up of names and places and terminology that all start to sound exactly the same.

There’s dialogue that’s laughable, line readings that sound like something out of a parody and a number of complete implausibilities that border on ridiculous. Take, for example, the delicate, precise care with which Langdon treats an ancient document in the Vatican archives. He wears white gloves and turns its pages with tweezers because he doesn’t want to damage it in any way. Makes sense, since the paper is hundreds of years old and priceless. Why then, several scenes later, is he carelessly waving that same piece of paper around like it was a grocery list… and then, even later, reading another priceless Vatican document and putting his ungloved hands and fingers all over it and (if reality were to factor in) essentially destroying it in the process????

Unfortunately, Angels also wastes two of its best assets: Ewan McGregor, as the young Camerlengo trying to hold Catholicism together during the crisis, and Danish actor Nikolaj Lie Kaas (Brødre), who co-stars as the assassin offing the Cardinals. Both are wonderful, and both (especially Kaas) are sorely underused here.

It was all rather disappointing, but not surprising… especially when I revisit my closing thoughts on The Da Vinci Code, which seem perfect for this film, as well:

Maybe fans of the book will feel differently and will praise the filmmakers for their efforts, but those efforts were lost on me. The action was inactive, the storytelling was extremely dense and leaden, the performances were fine but for the most part uninspired, and the Big Fat Secret everybody’s trying to track down was obvious to me shortly after their quest began.