Annabelle: Creation finally answers the nagging question: How DOES a good doll go so very bad?
By Lindaon January 27, 2018
0 Comments
Our Rating 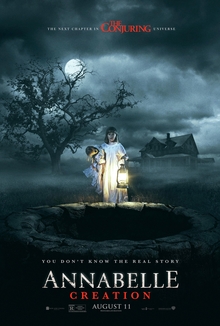 On Halloween night, after a horrific commute, I decided to hunker down and stay at home rather than go out. I just so happened to have a copy of Annabelle: Creation to watch. Perfect! A little bit of horror on a dark and stormy night. I joked to others that I was curious to find out the answer to the perpetual nagging question: How DOES a good doll go bad? Based on how cheesy and sucky the first Annabelle movie was, my expectations were low. So count me surprised that I had to pause the film a couple times to walk around or check Facebook or pet the cats.

Annabelle, the possessed doll first introduced in The Conjuring, is one of those dolls where, just by looking at her, you know that she is bad news. This is completely not obvious to the dollmaker Samuel Mullins (Anthony LaPaglia) a Geppetto-like man who creates her. Luckily, it is clarified that she is doll 1 of 100. Let’s just hope that Samuel didn’t get a chance to finish any others off-camera until his daughter is mown down in a horrible car accident.

Bereft for a dozen years, Samuel and his mysteriously now-incapacitated wife (Miranda Otto), eventually open their ridiculously large home to a gaggle of girl orphans who are charges of a young nun (Stephanie Sigman). The girls, particularly crippled-from-polio Janice (Talitha Bateman) and her BFF Linda (Lulu Wilson) quickly start sensing that something ain’t right in the huge house with their reclusive, sad hosts. But tweens will be tweens, and Janice opens up the hellmouth by going in that room that she is absolutely not supposed to go into. And in that locked closet (papered with pages from the Bible) that she is absolutely not supposed to open is a grinning doll. Hello, Annabelle!

Annabelle: Creation takes its time telling us how she got to be an evil doll. And in that time, the story shows us just how creepy and evil she can be. At one point, one of the girls grabs Annabelle in the night, and runs across a field to toss the doll in a deep well. Just as the doll should have hit bottom, a transformer blew up somewhere in my neighborhood with a perfectly-timed BOOM! and I pretty much had to hit the pause button and change my pants.

The movie is effective in its use of shadows, stairs, and closets. As it is through the eyes of a young girl (who is a loner who is pretty much ostracized by her peers), you feel as she does: vulnerable at every turn. Much of the creep is in darkness, relying on the viewer squinting, breathless, into the dark quiet, only to get the poo scared out of them when something creaks, moves, or jump. It’s a lot of fun (in that horror-movie-fun kinda way), and has some genuine scares. It unusual that a movie sequel improves upon the original, but in this case it’s true. Now maybe I would be curious to see more Annabelle movie incarnations, now that she has been given her proper due.

The extras make it clear that producer James Wan (creator of The Conjuring) is pretty excited about Annabelle: Creation and the other movies that could be possibly spawned from his original film. Remember that movie that the demon-hunters The Warrens had, where the doll in a glass box was just one of the many many possessed items that they has locked away? Now, imagine each of those potentially getting their own story (again, you can practically hear James Wan’s head spinning talking about this). In a fun addition, there are two short horror films “Attic Panic” and “Coffer” included that greatly influenced scenes that made it into this film.