All I can say is, if you collect dolls as creepy as Annabelle, you kind of deserve what you get.
By Lindaon January 26, 2015
0 Comments
Our Rating 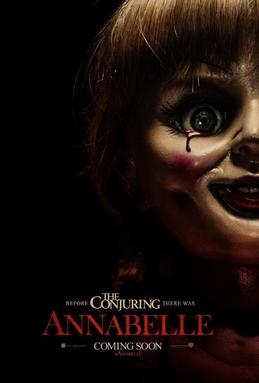 A minor breakaway star from the hit horror film The Conjuring, Annabelle was a creepy CREEPY possessed doll the proved to be such trouble that she is now (in reality) locked up in a carefully monitored case. We, as audiences, love to have the poo scared out of us, so it is unsurprising and rather clever for this supporting-character doll to get her own film (there is a first time for everything!). Unfortunately, Annabelle is not as scary, fresh, or intriguing as The Conjuring (a film that made my Top Ten that year).

Now, I know horror movies typically have bland main characters (probably so the audience can turn against them and wish the worst for the poor souls), but Annabelle’s lead couple is bland bland bland. It is 1970, and fresh-scrubbed California newlyweds John and Mia just look like modern hipsters wearing fashionable vintage clothes. (Seriously, throwing in 1960s cars and a record player are about all the effort the art department threw in to make this movie look like it was another era.) Mia collects creepy vintage dolls for the nursery, and is delighted when John presents her with the missing link to her collection, the hard to find doll whom we come to know as Annabelle. Yeah, because a newborn would love to wake up in the middle of the night to have beady glass eyes staring at her from all directions. Anyway.

There is a truly a horrific moment when John and Mia’s neighbors get slaughtered by a pair of Charles-Manson-like religious cult freaks. In the ensuing chaos, the violence spills to John and Mia’s house, where the lady-killer proclaims to Mia, “I like your dolls…” before being shot to death by the cops, where the woman’s blood, yes, drips right into the eyeball of the doll. Ew. Promising start.

But as Annabelle rolls on, it just becomes a typical horror film. The creepy doll is tossed into the trash, and the couple moves to a new apartment. Guess what? There’s the doll in a moving box! Foreshadowing is pounded into your eyeballs, from Mia’s running an old-school sewing machine with her fingertips dangerously close to the needle, to a dark apartment building basement where Mia only has a flashlight, to the always foreboding record player that starts playing on its own in the middle of the night. There are a few good scares in Annabelle, but there is nothing unique about it. If anything, it is a little disappointing that the doll itself is kind of a supporting character in this story, too.

One saving grace is that Alfre Woodard shows up to show everyone how its done. I’m not sure what she was doing in this film in the first place, and after seeing it, I’m still not really sure (diversity? a token friend for the lead? having a character who is vaguely memorable just because she is played by Alfre Woodard?). Unfortunately, Alfre doesn’t get much to work with, though a sad past is hinted at, enough for her to have A Purpose at the end of the film. But it is too little, too late… that is, except for everyone except Annabelle. 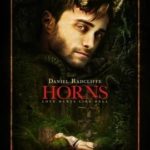 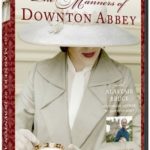