Apocalypse Now is one of those American classics, like The Godfather or Citizen Kane, that is pretty much slobbered over by all respected critics. No one ever says anything bad about these films, probably for fear of having their Serious Movie Snob card revoked with one swift snatch. Well, I’m not here to defend The Godfather (great) or Kane (snore), but I will dare to not give Apocalypse Now (Redux, at least) the vaunted full-pie. 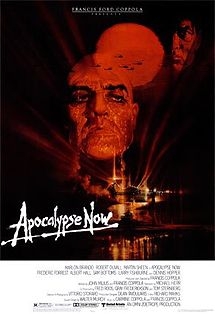 As bloated as Marlon Brando, Redux is a three-plus hour re-edited director’s cut of what is widely agreed to be a great film. We still have the basic plot framework of the original film, based on Joseph Conrad’s “Heart of Darkness”: In the Vietnam War, an Army captain (Martin Sheen) is sent up-river on a top-secret dangerous mission to assassinate a high-up US officer (Marlon Brando) who has basically flipped-out and gone native in the jungle. Most of the film takes place on the river, as Sheen and his boatload of comrades-in-arms, including Frederic Forrest and a very young Laurence Fishburne, encounter all sorts of dangerous and often bizarre situations.

Now, it has been awhile since I saw the original cut of Apocalypse Now, much less remember my original response. I found myself squinting in concentration, trying to figure out which scenes were new (apparently there’s 49 minutes of additional footage in this version), and which scenes seemed to improve (or detract from) the film.

One scene that is definitely new involves the boat stopping at a French plantation occupied by French soldiers. One of the boat’s casualties is buried in a ceremony, then the Americans have dinner in the swank plantation house. Sheen’s character even gets a little somethin’-somethin’ from the mistress of the homestead, if you see what I’m sayin’. But this scene just pulls viewers completely out of the plot, if only to add some political perspective that didn’t really go anywhere. Not to mention there is some really bad cheeseball “love scene” synthesizer music that totally caused me and my friends to squirm and giggle. Listen, Coppola, the reason the scene was probably cut in the first place is that it didn’t work.

There are a few other snippets of new scenes that I liked much more, including the soldiers stopping at a muddy river camp and running into the Playboy bunnies, and another of the guys stealing a surfboard from the fabulous hard-ass character played by Robert Duvall (in easily the best performance of the film).

But as I was paying attention to the film with such focus, I realized that once the boatload gets to its intended target of Marlon Brando, I pretty much start hating the film. The tone changes into an annoying Lord of the Flies motif, of boys in the jungle trying to be king of the hill by whacking each other over the heads with machetes. Other than the fabulous imagery in the last chain of events (like of the famous shot of Sheen’s face emerging from the steamy water at night), I would be just as happy to edit out the whole ending of Apocalypse Now, leaving what is otherwise an excellent film.

Over the years, several different DVD versions of Apocalypse Now have been released, including the bloated Apocalypse Now Redux. Now, finally, both the original and extended versions of the film are available in one economically-prized two-fer package, Apocalypse Now: The Complete Dossier. Though message boards are rife with fans complaining that this package is hardly the “complete” version—as it does not contain the fabulous behind-the-scenes feature-length documentary Hearts of Darkness—it is still a pretty nifty package that more casual fans should enjoy.

The discs are packed with extras, including a “Redux Marker” that lets you see exactly what footage was added to the long version of the movie (handy!), a fascinating commentary by Francis Ford Coppola, even more deleted scenes (I can’t help but imagine an Apocalypse Now Redux, Redux Again! version coming out someday), and of course a slew of featurettes, including a timely one on the soundtrack by the recently departed Father o’ Synth Bob Moog and lots of explanation about its impressive pioneering use of Dolby 5.1 Sound.

A quibble about this collection—and, yes, kind of a major quibble—is that despite the fact that you DO get both versions of the movie, BOTH films are split between the two discs in the set! Huh? I’m sure who decided that this would be a good idea, but it sure isn’t the most obvious design in efficiency. It reminds me of the good old days when 3-hour Dances With Wolves was split on two VHS tapes. Hmmm. Maybe having a whole movie on each disc was too obvious? I don’t know, but someone should be slapped for it.