Head-scratchingly intriguing right up to the closing credits, Arrival is a worthy addition to the pantheon of cerebral sci-fi.
By Lindaon May 4, 2017
0 Comments
Our Rating 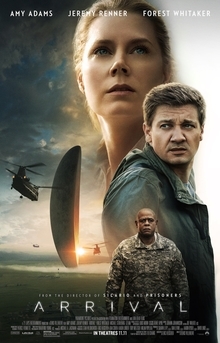 Using an opening collage of gauzy scenes, we meet a woman (Amy Adams) as she feels the joy of new motherhood, the delight of seeing her beautiful child grow into a smiling little girl, and the crushing, devastating grief of losing her teenage daughter to nameless disease. Cue present day, and this woman, Louise Banks, seems to be sleepwalking through her life as a linguistics professor at a college. One day, campus is strangely empty, and only a few students show up to class. One cell phone goes off, then another, then another. A student hesitantly asks her professor to turn on the TV to the news. Mysterious alien ships have appeared in 12 locations around the world.

Let me just say, this opening sequence, from collage to invasion, had me breathless. Using eerie silence as a character, I nearly jumped out of my seat when the school alarm suddenly went off, or when fighter jets screamed by over the campus. It reminded me in no small way of the surreal day of 9/11. Arrival had me hooked.

Louise is summoned by the government via dead-serious Forest Whitaker from Army Intelligence. As one of the nation’s top linguists, she and a scientist named Ian Donnelly (Jeremy Renner) seem like the United States’ best bets to figure out a way to communicate with the residents of the ships (one of which is hovering in Montana). Of course the military’s priority is to find out who the aliens are, and what do they want. Louise steps in and points out that getting to that level of understanding will only happen linguistically when super basic aspects of language and interpretation can take place. This isn’t Star Trek and there is no universal translator. Nerds for the win!

Without saying anything else about the plot of Arrival, the intrigue is watching the discoveries unfurl slowly. Director Denis Villeneuve also created the slow-burn kidnapping drama Prisoners, and is very good with actors. Amy Adams gives a great performance as a sad woman whose life seems re-energized by a mystery that could potentially destroy her and all humankind. Jeremy Renner is kind of adorkable as her colleague who is just as in awe at the opportunity to decipher something completely and entirely new. The gorgeous cinematography (by Bradford Young) and spooky soundtrack (by Jóhann Jóhannsson) are huge players in creating this haunting, thought-provoking mood piece. There are few movies that you want to turn around and watch again, but with its brain-teasing story that is like an untangling ball of twine, Arrival fits the bill before it is even over.