To give Bait 3D some credit, it has the single greatest tagline for a movie about a shark terrorizing hapless victims in a supermarket: “Cleanup in Aisle 7!” (with a picture of a severed leg in a shopping cart). Haw! 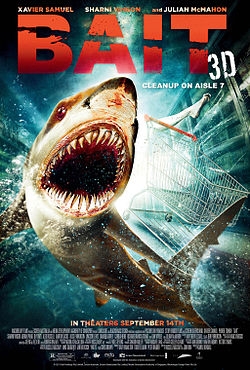 Now, before you can say, “Wait… what?”, here’s the plot: A tsunami hits an idyllic Australian beach town, flooding a supermarket, and trapping customers, employees, and (yes!) a couple criminals with guns. Before you can say, “Watch out for that live wire dancing just above the water…” something unexpected happens. A man gets pulled under water. No, it is not that snake from the garbage pit in Star Wars. A sharp lifeguard in the house sees a fin and immediately proclaims, “That’s a 12-foot great white! Everyone out of the water!”

Of course you have all the cliched characters in peril. There are the estranged ex-lovers (Xavier Samuel and Sharni Vinson), who are still traumatized about how her lifeguard brother was chomped in half at the swimming beach, and how he, her lifeguard boyfriend was unable to save him. There’s a mysterious criminal (Nip/Tuck‘s Julian McMahon), who is apparently an American on vacation that decides to hold up a grocery store. There’s his partner (Dan Wyllie), who is there to offer a maniacal laugh, and be the first to offer to toss someone in the water as bait. There’s a cop, a store owner, a couple of sexed-up surf kids, a new boyfriend that will sacrifice himself so the leads can kiss, etc., etc. Oh! And a little dog! Swim, little Pomeranian! Swim! I guess it shows my age that I wanted all the pretty young people to get chomped in half, and instead would have preferred the hot older cop (Martin Sacks) to wrestle a shark in his wet shirt. But that’s just me.

The best part of the movie is that by having it take place in Australia, the poor souls trapped in the flooded parking garage get to exclaim, “There’s a shaaaaaaahk in the caaaaahhhh paaaaahhhhhk!” The worst part is that the movie takes itself a little too seriously. A setup like this demands CAMP. More over-the-top carnage! More over-the-top laughs! Less furrowed brows! As it is, Bait 3D is passable horror fun, but should have (and could have!) been so much better.

Bait 3D is, yes, in 3D for those who have the capability. Except for a nice opening credit moment of a chomped body flying out of the screen, I’m not sure that was much in the film to really take advantage of 3D effects. The only extra was a series of storyboards.