What’s a little collateral damage if you are trying to save the world?
By Lindaon December 9, 2016
0 Comments
Our Rating 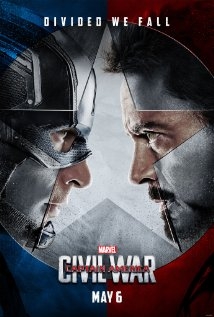 First, this is really an Avengers movie that has Captain America’s pretty face at the forefront. If you want to see almost all your favorite heroes from the last beeeeellion Marvel movies (except Hulk and, thankfully, dull Thor) they are here, along with a couple notable introductions (Tom Holland’s teen wonder Spider-Man and Chadwick Boseman’s clawed Black Panther). Second, this film in particular really felt like it deserved a mini-series. Like many “bigger is better” action films these days, it bloats at 2 1/2 hours. For a change, though, Civil War is filled by a lot of good, interesting stuff. (But it is still LONG.) Finally, save your money on 3D. I chatted with a few others after the show and none of us could name any scene that was enhanced by the big clunky glasses. The 3D did, however, make me close one eye during the frenetic action scenes so that my optic nerves wouldn’t fritz out.

If you’ve ever wondered why no one else in the world seems to mind when superheroes accidentally knock down buildings full of people during a fight, or rip an entire village from the earth and shake it upside down, well, you aren’t the only one. This seems to be the year of Superhero Guilt (see also Batman v Superman). Civil War opens with a showdown in Lagos, Nigeria (hey! fresh location!) where the Scarlet Witch diverts a bomb from exploding in a market… where instead it explodes in a building, killing a bunch of civilians. Ooops. The international community is not pleased. In fact, the United Nations thinks that for everyone’s safety the Avengers should be under control of the UN to keep them from going rogue–which happens, oh, about every movie.
Tony Stark/Iron Man (Robert Downey Jr.) thinks this is a good idea. Surprisingly, good soldier Steve Rogers/Captain America (that nice Chris Evans) does not. The Avengers are split, and there doesn’t seem to be any good answer.

Shit hits the fan when a terrorist attack at the UN implicates Cap’s old buddy Bucky (aka Winter Soldier). Steve has always earnestly believed in Bucky, even when his friend was brainwashed, and thinks ol’ Buck is being set up. The UN, of course, wants his head for the attack. And that is just the beginning, setting up a showdown between the Avengers where things get very personal.

Despite its epic length and too much plot, Civil War has a lot going for it. The central Avengers showdown on a Berlin airport tarmac is enjoyable (it’s all fun and games despite someone FINALLY getting hurt). But just when I thought the conflict among the superheroes amounted to a playground tussle, just wait. Everyone wants to see what would happen if Captain America and Iron Man faced off… and when they do, oh man, there is a good reason. It is hard to know whose side to take (despite the fact that I gleefully grabbed a #TeamCap button at the door of the theater). Civil War takes a leap and goes beyond the good guy/bad guy assumptions, and brings in a heft of morality, revenge, and forgiveness to justify actions. How refreshing to have a superhero movie that is not only entertaining but challenging.