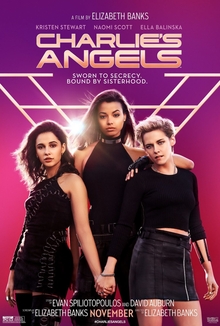 Those are words I never dreamed I’d ever say, and yet I did – more than once (albeit silently to myself – while watching the latest big-screen incarnation of the Townsend Agency’s iconic trio of sleuths, because Stewart is one of the best things in it.

Gone is the sullen, mumbly, seemingly annoyed millennial we’re using to seeing when she shows up onscreen. Instead, she’s refreshingly funny (!), fierce and easily the most likeable of the bunch in director Elizabeth Banks’ fun but uneven actioner. WHO KNEW?!

This time around, our Angels are goofy and outspoken (and possibly gay) Sabina (Stewart); emotionally icy but athletically skilled Jane (Ella Balinska); and wide-eyed tech nerd Elena (Naomi Scott), who’s recruited into the titular now-global network of ass-kicking, do-gooding super spies after her brilliant new invention – an A.I.-driven power source called “Calisto” – falls into the wrong hands. Guiding the ladies is a roster of numbered Bosleys – among them, Banks, Djimon Hounsou and Patrick Stewart as the O.G. Boz (#1), who retires as the film begins.

Soon, the comely crew are facing off against a ruthless tattooed assassin (Jonathan Tucker in a terrific turn reminiscent of Robert Patrick in T2: Judgment Day) in a series of action sequences – a car chase here, a meticulously choreographed fight scene there,,, and there… and there again – as they attempt to recover Calisto, uncover the person or persons behind its theft, and cover themselves in wildly colorful disguises to infiltrate an equally colorful array of places.

While Charlie’s Angels has a lot going for it, it’s not without its problems. I kept flip-flopping between loving it and wishing it had been better.

Banks’ female-empowerment script is packed with messages about sisterhood, alongside plenty of one-liners and clever asides (see: the entire Birdman of Alcatraz sequence), but it also carries on the “pretty girls in costumes” trope from the original series. While Sabina is a textbook tomboy with a quirky flair, both Jane and Elena look like textbook fashion models – and so do most of the other worldwide Angels we see onscreen. Wouldn’t it have been cool to cast, say, Booksmart’s Beanie Feldstein as an Angel? There’s also a fairly pointless subplot about a woman in Istanbul that could easily have been cut.

Speaking of the actresses, Stewart and Banks are a perfect match, banter-wise, onscreen and are far more engaging than their two co-stars. While Scott is fine, she’s not especially memorable. And Ella Balinska feels hugely miscast – she’s flat and cold, and isn’t really convincing. I kept thinking how much better the film could have been with someone like Kylie Bunbury or Kiersey Clemons as Jane (if the filmmakers wanted a woman of color in the role). As well, the chemistry between the trio of Angels is lacking, which is problematic.

The male supporting players like Hounsou, Patrick, Sam Claflin (as a tech magnate who just wants to throw a great party) and scene-stealer Luis Gerardo Méndez (who’s sort of like the Angels’ answer to 007’s gadget-guru Q… but with a new-age twist) are all great, but they actually feel like more fully formed characters than the film’s three leads, which is odd.

And the action, while impressive, also gets tiring and repetitive. Trimming some of those sequences would have picked up the pace a bit and done wonders for the running time which, at just shy of two hours, feels a little excessive.

Overall, Charlie’s Angels was a lot better than I thought it would be and Banks, who’s always terrific onscreen, proves she has the mettle to handle (both in front of and behind the camera) what could be a new franchise. Here’s hoping the inevitable sequel builds on the promise of this admittedly enjoyable film to deliver something even better.

On the home video release, there are love fests from/for director/writer/actor Elizabeth Banks and her cast, plus featurettes about fashion and action scenes, gag reels, and deleted scenes.