Obviously inspired by the venomous hatred that spewed forth on the internet when a certain purple dinosaur became hugely popular with children, Death to Smoochy is as full of one-note meanness as any of those “Barney Must Die” websites. The joke is funny the first time, and the second time as well. But did it need to be expanded into a feature-length film?
By Lindaon August 24, 2014
0 Comments
Our Rating 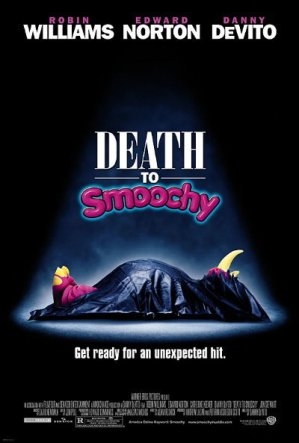 Robin Williams plays Rainbow Randolph, a children’s television show host that has fallen from grace after getting caught taking a bribe from some supposed eager parents who want their kid front row center on his show. Much to his bitterness, the station programmers (Jon Stewart and Catherine Keener) easily replace him with squeaky-clean Sheldon Mopes (Ed Norton), aka “Smoochy”, a purple… rhino! Sheldon Mopes is as wide-eyed aw-shucks-innocent and noble-minded as Rainbow Randolph is expletive-spewing, money-grubbing, and corrupt. Rainbow Randolph vows to take him down.

Throw into the mix an Irish mafia run by a burly woman named Tommy (Pam Ferris), a slithery manager (Danny DeVito), some neo-Nazis, a dim boxer, very corrupt children’s charities, and a cheesy love story, and, well, you have a movie that goes on and on and on, beating you over the head with its black humor.

It’s not that I didn’t laugh. I did. Put Robin Williams, Ed Norton, and Catherine Keener into any movie, and they are bound to come up with some chuckles. But Keener seemed relegated to playing a variation of catty Maxine from Being John Malkovich and (as much as I hate to say it) didn’t quite gel with her co-stars. And both Norton and Williams are exhausting one-note characters: Williams with his hyperactive potty-mouth overdrive, and Norton excreting saucer-eyed optimism.

Death to Smoochy would have worked well as one of those 15 or 20 minute short films that you see at film fests, that makes you rock with laughter in a short time without wearing out its welcome. But there is really not enough material to excuse a full-length movie. After awhile, you not only want to beat Smoochy over the head with a baseball bat, but also Rainbow Randolph, Danny DeVito, and almost everyone else involved.