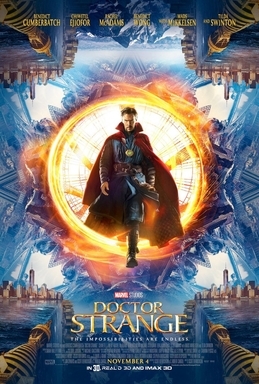 OK, so I know dismissing a whole Marvel movie based on the theory of white male privilege sounds dismissive, but a few hours after watching Doctor Strange, the latest in a slew of superheroes we’ve never heard of, I realized how perfectly this film fit the mold.

Doctor Stephen Strange (Benedict Cumberbatch, sporting an American accent) is a surgeon who is a genius with his hands. He is very pleased with his skills, and he is even more pleased for being recognized richly for it. He’s basically an arrogant, entitled dick. One night, on the way to a schmancy event, he glances at his phone too long (pay attention, kids!) and gets into a horrific car accident. His hands are mangled and he unsurprisingly freaks out. In desperation to become his old, perfect self again, he literally takes off to the Himalayas when he hears of a miracle cure that can restore him to wholeness (and success) again.

Whereas the Avengers fight to protect the physical world, the “not a cult” folks he meets in Kathmandu are there to fight for the spiritual world. Led by The Ancient One (a bald, mystical Tilda Swinton), these sorcerers can conjure sparkly wormholes with their hands, create mirrored rooms separate from our reality, and mess with the time/space continuum. Basically, if you can think it and concentrate on your chakras, you can practically will yourself into being a superhero.

Guess what? The greedy, self-absorbed white guy is a natural. Thankfully, there are women and people of color around (including Chiwetel Ejiofor and Benedict Wong) to accommodate his tics and help him realize his natural skill at all things in this alternate world. Finally, an arrogant white guy shows up just in time to save the world!

Luckily there is also a bad guy, played by Mads Mikkelsen with decaying eye-sockets. Mads is the best thing about the film, as he is SO good at playing inherently bad. What can I say? He’s hot. He also introduces the other inarguably cool thing about the movie: a spell that allows him to go all Inception on reality, causing architecture to collapse and spin on itself, or cities to bend their roads and skyscrapers all Escher-like. This creates eye-popping cat-and-mouse sequences that, simply put, would not have been possible to conjure in the cinema just a few years ago. But like many things in the Marvel Universe, it looks as awesome as it is entertaining on the surface, and ultimately forgettable.