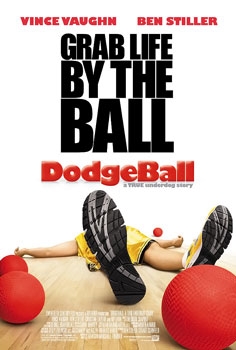 Vince Vaughn stars as Peter La Fleur, an aimless but contented slacker who runs Average Joe’s gymnasium – a sort of haven for the geeky, the unathletic and the societally scorned. Across the street is the mammoth Globo Gym – a flashy, expensive fortress of fitness designed for the overall esthetic improvement of the masses. Ruling the Globo roost is White Goodman (Ben Stiller), a pint-sized, mustachioed musclehead whose gloriously feathered hair is rivaled only by his skin-tight workout garb and pump-enhanced athletic cup. White wants Average Joe’s bulldozed so he can build a new parking structure for his clients. Peter, ever the careless businessman, has essentially run his gym into the ground and discovers that he has 30 days to pay off his $50,000 mortgage or Joe’s will be no more.

But how, dear friends, HOW can he possibly raise that much money in such a short time?

By entering the national dodgeball championships in Las Vegas, where the winning team is awarded exactly $50,000, that’s how!

Assembling his riff-raff (including Alan Tudyk, Justin Long, Joel David Moore and Stephen Root, who seems to be reprising his character from Office Space), Peter enlists the aid of crusty veteran dodgeball champ Patches O’Houlihan (Rip Torn) as coach. Together, the misfits prepare to relive the painful, humiliating, gym-class days of their youth, and the film contains the requisite amount of in-training sequences to illustrate the team’s ineptitude.

Guided by the spirit of things like Zoolander and South Park, Dodgeball marches confidently forward, not afraid to thumb its nose at political correctness in the name of biting humor. The movie seems, to the untrained eye, to be nothing more than a goofy, slapstick comedy, but it’s actually super clever and skewered to an intelligent audience. There are plenty of throwaway asides and in-jokes that, I’m sure, some portion of the audience will miss. (White’s overall homoerotic environment, for starters.) The dodgeball educational film is genius, and the entire championship portion of the film is simply priceless. Who knew Gary Cole and Jason Bateman – as courtside commentators for ESPN 8 (“The Ocho”!) – could be that hilarious?

Both Vaughn and Stiller are superb, playing their roles completely straight despite the absurdity of what they have to say or do. Rip Torn is a riot as a totally un-PC, wheelchair-ridden ex-hero, who’s as interested in scoring with Vegas hookers as he is in scoring on the dodgeball court, while the real-life Mrs. Stiller, Christine Taylor, proved she can play with the boys and hold her own. Literally. I didn’t recognize many of the supporting players (save for Root), but they have to be applauded (really loudly!) for their ability to be violently beaned with balls over and over and over again in the face, groin and chest in the name of their art. Every time they took a hit I thought, “Ouch. Okay, that was real. I wonder how many takes they did of this shot alone?”

I laughed out loud a lot during this movie, and I suspect I’ll wind up being on the conservative end of the guffaw scale once it opens. And, for those of you who venture out to see Dodgeball, who laugh uproariously at its brilliance, I offer one important note: sit your butts down in the theater and stay until the very, very end of the credits for one last hurrah before you head home.