Season Five mostly recovers from the “ick” of the previous season by throwing in lots of romance and new characters to spark things up a bit. 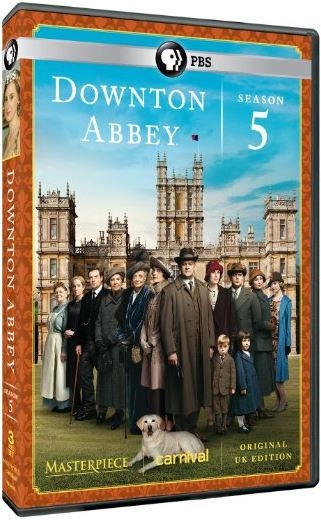 I know I wasn’t the only one that just about threw in the towel on Season Four of Downton Abbey. As if the carnage of losing two popular characters in Season Three wasn’t enough, the show threw unspeakable ugliness into Season Four with the (SPOILER!) sexual assault of the saintly lady’s maid Anna Bates. Awful, awful, awful. Not only that, but the secrets and lies of that plot dragged on and on… I actually quit watching halfway through the season.

But of course Season Five has come around and the curiosity got the better of me. I binged and finished the last season (which, in my opinion, didn’t improve much), and gave this guilty pleasure a second chance. I can’t say that the series has returned to the former glory of its first few dishy seasons, but at least it seems to be picking up again.

It has now jumped to 1924, which, if you think about it, is 12 years since the time of the original episode which featured the sinking of the Titanic. (The agelessness of the Lord Grantham’s dog Isis, featured in the opening credits this whole time, is finally acknowledged this season.) There is a new Labour government, which excites radicals like Tom, but upsets the rest of the crusty upper class. We get to witness lots of sparks and discussion as the feisty village schoolteacher Miss Bunting is invited to dinner one too many times in Lord Grantham’s opinion.

Meanwhile, Lady Edith still slouches around the house with all the enthusiasm of a wet towel as she vexes over the fact that her secret daughter Marigold is now being raised by the tenant farmer down the road. You can’t blame the farmer’s wife for getting irritated whenever the mopey rich girl comes over every day and paws at her adopted child. This goes on and on, and eventually comes to a head, especially when other members of the family get wind of Edith’s obsessive interest in the kid.

Lady Mary starts to get a spark of life back in her, after moping around after Matthew’s death, which left her child an orphan (one of my favorite lines after the tragedy). She still has the tiresome problem of juggling two uninteresting suitors (Lord Gillingham and Charles Blake), who both look distractingly alike, and who are both rather dull. Luckily, this whole mess sorts itself out, but not before Mary gets lots of saucy quips, and exercises her independence as a modern woman in more ways than one.

As for downstairs, unfortunately the woes of Mr. and Mrs. Bates continue, with the ridiculously drawn out and annoying “did he or didn’t he kill Mr. Green” drama. Luckily, other things are going on, like Daisy getting a spark of life as she is tutored by Miss Bunting, plus, a nice relationship seems to be growing between Molesley and Miss Baxter, who finally wrestles herself away from Thomas’ blackmail threats. Thomas, unfortunately, is as one-note as he has ever been, and this is too bad. Every time we get a peek of his humanity, it is dashed with another scheming subplot.

But I felt Season Five, once it got away from ugliness and death, started to get its spirit back. There is a fire, a fist fight, and even some Russians and Jews this time around. It helped that annoying characters, like Cousin Rose, got less annoying (as she was allowed to mature), and new new blood was thrown into the mix. The relationship between Maggie Smith’s Dowager Countess and Penelope Wilton’s Mrs. Crawley has grown to a pointy but mutually beneficial and affectionate friendship, which has become one of the true delights of the show. There are a few new suitors, like Lord Merton (who is interested in Mrs. Crawley), and a few other surprises (no more spoilers!). Let’s just say there are some new pairings that are quite sweet. This new blood as well as the continuing-to-develop class-system changes may be interesting enough to fill some implied looming gaps in the cast of characters, as Downton next lurches into the mid-20s, starched shirts and “yummy” fashions intact.