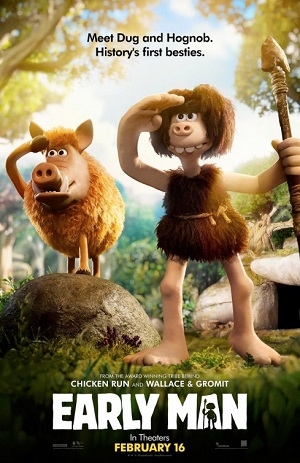 Let me start out by saying that I don’t think any film, long or short, has made me laugh harder than Aardman Animation’s Wallace and Gromit in the Wrong Trousers, their Oscar-winning short featuring a sinister penguin. My friends thought I swallowed my tongue, I was laughing so hard, and they pounded me on the back to try to get me to properly inhale after tears-inducing laughter. So my expectations for Aardman, and director Nick Park in particular, are always optimistically high, and they almost always please.

Early Man, though sweet and gently funny, is probably the studio’s first almost-miss. It’s is cute, but rather pedestrian and drawn-out, where you know the outcome as soon as the plot’s challenge is presented. Yet still, it is hard not to love such a painstaking style of animation–claymation in particular–where you can often see the human fingerprints on the clay characters where they have been bent and molded.

The plot involves the clash of early, simple hunters and gatherers with the arrival of more advanced bipeds in the form of those humans who have advanced firmly into the Bronze Age. The plot also involves soccer. Basically, Stone Age caveman Dug (Eddie Redmayne) and his sidekick pig Hognob (Nick Park) have to lead their tribe of knuckle-draggers in a soccer match with the more evolutionarily-advanced team owned by one Lord Nooth (Tom Hiddleston). If the cavemen win, they get to stay in their valley home. If they lose, they are booted out for Lord Nooth to reap their land’s bronze. Think “football” meets Gladiator, with claymation lips.

There are several inspired moments in the humor, with my favorite being a Spartacus-inspired massage scene featuring Lord Nooth and the pig. But I was wondering what was missing from Aardman’s humor this go-around, where in the past the studio’s creations always hit me right in the funny bone. Turns out that unlike previous films like Chicken Run, Shaun the Sheep, and the Wallace and Gromit oeuvre, director Nick Park wasn’t one of the screenwriters. It’s not until that magic spark is missing that you realize what a magic touch Park has with goofy humor. Because of this, Early Man is kind of cute and sweet, but not particularly memorable. 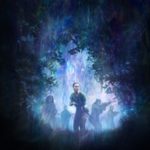