This movie really should be called Elizabeth: The Age of Bright White Lights, because I lost count of the number of times our titular monarch was shot bathed in brilliant luminescence as though she were an angel descending from heaven. Heavy-handed? Erm, a tad.
By Vickieon September 29, 2013
0 Comments
Our Rating 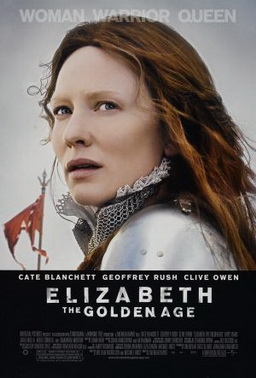 More than a little over-the-top and art-directed to within an inch of its life, this sequel to 1998’s Elizabeth is set in 1585 and tracks, among other things, the relationship between Elizabeth I (Cate Blanchett, reprising her Oscar-nominated role) and Sir Walter Raleigh (Clive Owen), and the myriad threats to Elizabeth’s life…not the least of which are a whole slew of trigger-happy, angry Catholics and a comically maniacal King Philip II of Spain (Jordi Mollà, who crosses the line into camp), who plans to invade England and take over as part of his Holy War. See, Mary Stuart (Samantha Morton, seemingly channeling Hannibal Lecter for a good portion of her screen time) has been imprisoned in a Scottish castle, and a lot of people would like to see her, not Liz, on the British throne. While all that’s going on, one of Elizabeth’s companions, a young woman named Bess (Abbie Cornish), is also falling for Raleigh, creating a rather perilous love triangle for all its players.

That’s a whole lot of stuff to cram into 114 minutes and, not surprisingly, it doesn’t really hang together well. The tone of the film veers all over the place from historical drama to laughable melodrama to romantic comedy. Don’t believe me? Check out the scenes of Elizabeth meeting her suitors, or the initial flirty interplay between her and Raleigh – it’s right out of a Hollywood-machine romcom and does a disservice to the comparative gravitas of the rest of the proceedings. The script is choppy at best, jumping from event to event so frequently and abruptly that it’s hard to care about any of it – should we be invested in the romantic angle, or the religious strife, or the assassination plots, or the status of Mary Stuart’s secret letters, or the creepy, DaVinci Code-esque Robert Reston (Rhys Ifans), who reminded me an awful lot of Paul Bettany’s overzealous albino monk? Who knows. Did I mention there’s also some rather curious HoYay! between Elizabeth and Bess – witness the bath scene – that I didn’t get. I don’t know if it was intentional, or whether their interaction was meant to be affectionately platonic, but I started to wonder if Elizabeth was more jealous of Raleigh than she was of her young attendant.

In addition, there’s the world’s most meh battle sequence at the end, which takes place at sea and so very obviously with the intervention of blue screens and a ton of CGI. The ships look fake. There, I said it. And Clive Owen strikes so many “Look! I’m Errol Flynn!” poses throughout the fighting that I actually started to laugh. Unfortunately, I blame director Shekhar Kapur for the missteps, even though he kicked ass on the first Elizabeth film. Here, it seems as though he may have been trying to please too many people all at once – the studio, the actors, the writers and the regal subject herself, who’s likely turning over in her grave a little and wondering what the frick is going on. Oh, and one more point: Elizabeth I was in her 50s at the time when this film is set. Her 50s. I’m sorry, but Cate Blanchett, despite some unflattering shots clearly designed to maker her seem older, doesn’t look close to being that age. Sorry.

Elizabeth: The Golden Age is a very pretty film to look at, but one that fails to satisfy on a storytelling level.