Boyfriends, girlfriends, and fast-aging little brothers lay ahead, but for now they’re no concern of ours.
By Jenniferon March 16, 2014
0 Comments
Our Rating 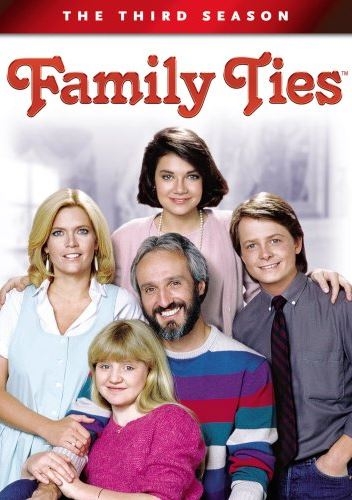 It seemed to me that Seasons 1 and 2 of Family Ties approached perfection, and yet, I love Season 3 even more. When Meredith Baxter Birney’s real-life pregnancy is written to the script, we find the Keatons anticipating a surprise addition to the family. I hadn’t remembered this happening so early in the show’s run, and already I was dreading the sudden arrival of five-year-old Andy (Brian Bonsall). The show seemed to take a downward turn after he showed up, and I feared that Season 3 would serve as a distressing precursor. Thankfully, the Keatons are just as nervous as the rest of us, and their excitement and anxiety helps us to make the transition. I’m sure they were just as startled as we were when Andy aged 4 years over the course of a hiatus, but for now we don’t have to worry about that.

In addition to Elyse’s pregnancy, there are other major developments in the Keaton household. Alex has started college, and Mallory has finally found something she’s good at – working in a boutique. Though there is some concern that her new job is interfering with her schoolwork, Elyse and Steven soon realize that sometimes “fabric smarts” are just as important as book smarts. It’s an important turning point for Mallory as a character, and puts her one step closer to finding herself. One of the best things about the show is that it didn’t trivialize its characters. Mallory may not have been the brain of the family, and she may not have turned out exactly as her parents hoped, but that didn’t mean she wouldn’t be successful. “Fabric Smarts” is one of my all-time favorite episodes, but nothing holds a candle to “Love Thy Neighbor”.

Jennifer is thrilled when her favorite neighbor comes back to visit, and she can’t wait to catch up and do all the things they used to do. Imagine her horror when she discovers that Scott no longer wants to hang out with her because he’s got eyes for Mallory! Though she’s too young for him, she slips on some high heels and pearls, and crashes Scott and Mallory’s date. It’s a painfully embarrassing move, but somehow I think we’ve all been there – just wanting desperately to be old enough to be taken seriously and falling woefully short. Jennifer could easily become the butt of this joke, but Mallory recovers nicely, and helps her younger sister to save face. It’s a genuinely kind and empathetic gesture that reflects the sort of understanding we should expect from our family members.

Also spicing up Season 3 are guest appearances by Geena Davis (check out the height difference when she kisses Michael J. Fox!), and Jeff Cohen (a.k.a. Chunk from The Goonies) who drops in when the Keaton kids rent out rooms for the weekend. This DVD set treats us to 24 absolutely classic episodes from the show’s run, and allows us one last chance to enjoy the Keatons as we met them. Boyfriends, girlfriends, and fast-aging little brothers lay ahead, but for now they’re no concern of ours. Extra features include original episodic promos, a gag reel, and the Michael J. Fox public service announcement on Parkinson’s Disease.