Let’s just say, if you have tried a transporter successfully ONE TIME with a monkey, and proceed to use it yourself like an hour later, the “Science!” in your head is rather suspect.
By Lindaon July 12, 2016
0 Comments
Our Rating 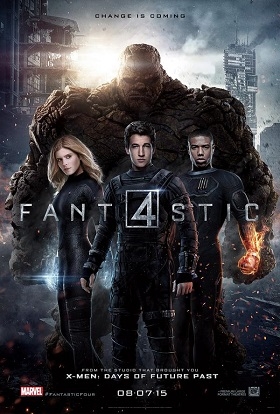 Starting on a gentle, note of wide-eyed fantasy, I was thinking to myself that this latest reboot of Fantastic Four harkened back to an almost-Spielbergian earnestness, down to a junkyard set that looked like it was on a soundstage. There may as well have been a row of corn lining the lot, rustling with mystery after the crash of a garbage can lid. Young, nerdy inventor Reed and his buddy Ben are conducting experiments in Reed’s garage. You know, the typical wires and tinfoil that can transport a matchbox car to another dimension and blow out the power in the entire city. Kids’ stuff.

We meet Reed and Ben again a few years later (now played by Miles Teller and Jamie Bell, respectively), showing off their honed transporter device at a high school science fair. After accidentally blowing some shit up, they pique the interest of one Dr. Franklin Storm (Reg E. Cathey), who sees Reed’s potential in figuring out the missing link in his attempts to transport bio-matter to another dimension… and back!

Blah-blah-blah… Reed, Dr. Storm’s smarty-pants daughter Sue (Kate Mara), her rebel brother Johnny (Michael B. Jordan), and Reed’s old working-class buddy Ben end up messing around with their human-sized transporter after a bender. Let’s just say, if you have tried a transporter successfully ONE TIME with a monkey, and proceed to use it yourself like an hour later, the “Science!” in your head is rather suspect. When Sue barely gets the errant boys back into our time/space continuum, bad stuff has happened, and they are all cursed/blessed with strange afflictions and/or powers.

Now, I was still kind of going along with this. Johnny emerges from the accident completely, continuously on fire, while Sue is pulsing in and out of visibility. Ben, poor guy, couldn’t shut his pod bay door, Hal, and ended up being pummeled with rocks, turning him into a hulk made of stone. And, for whatever, reason, Reed’s limbs now stretch like rubber bands. All of these afflictions seem horrible, and cause some angst and torment for these young people, not to mention Dr. Storm, who is tortured to see his brood suffering.

But then: One year later!

Did the studio got restless? Did someone cut funding? Did someone behind the scenes got fired? Because at this point Fantastic Four suddenly becomes… typical. Not that I needed a montage scene of the Thing punching slabs of meat, or the Human Torch learning how to control his flames, or the Invisible Girl furrowing her brow a lot to stay visible. But still… what? Instantly, they have methods to control the madness, new skills (flying??), and are all, yay! The way the film was going, I was expecting, and looking forward to some Wolverine-angst of adjustment, or at least teenager-style growing pains from learning that your life is certainly never going to be the same.

Instead, Fantastic Four rushes through the second half. The young folks have fancy power-controlling suits. Reed, after fleeing the accident, shows up and fixes the mostly-built second teleporter in like two seconds. They jump to the other dimension, a completely expected villain shows up, multiple heads splatter all over the walls (!!!), a black hole opens, and whatever. I mean, not to spoil anything but… again, whatever.

Now, if you have read enough of my reviews of superhero movies, I go into them with pretty much no expectations. But Fantastic Four, I thought, started out kind of good… kind of different. I was enjoying its earnest tone that leant to a sort of cheesy 50s-sci-fi B-movie dead-serious style (down to the other dimension looking, again, like a soundstage with the CGI-equivalent of matte-painted scenery). I liked that an African-American father figure introduced his white daughter and black son, and everyone is all, “Nice to meet you guys! Let’s make a teleporter!”

But just like Reed’s childhood experiments sucking all the energy from the city when he flipped the switch on his transporter, a similar same metaphorical switch happens in Fantastic Four. A kind of good movie abruptly turned into a movie that kind of sucked. Who the heck knows what better movie may be splattered all over the metaphorical cutting room floor.