Sex, drugs, and disco can still make for a dull movie. 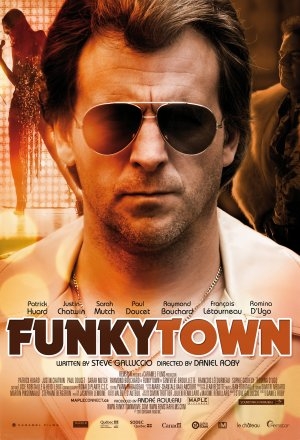 There is something satisfyingly cinematic about seeing glittery, decadent characters stumble and fall, becoming mere mortals that sometimes wake up in a ditch like anyone else. The disco era of the late 1970s is ripe for such a story, as we’ve seen from the good (Boogie Nights, Saturday Night Fever), the bad (54), and the terribly fabulous (Can’t Stop the Music). So why not throw in a new twist and have it take place at a disco palace in swinging Montreal? Alas, despite the characters’ tendency to flip between French and English mid-sentence, that twist is not enough to make Funkytown different or particularly interesting.

Too many characters are having too much of a good time. It is 1976 Montreal, and the Starlight club (apparently based on a real-life, Studio 54-ish club named the Lime Light) is the place to be and be seen. Bastien Lavallée (Patrick Huard) is the cock of the roost. He is Casey Kasem, Dick Clark, and, well, I guess John Travolta rolled into one. DJ, dance show host, and target of the ladies, he has his eyes set on the hot chick of the moment, a sexy model named Adriana (Sarah Mutch). Never mind that he has a wife and kid and suburban home.

Bastien’s co-host Jonathan (Paul Doucet) is eyeballing a hot young dancer/waiter named Tino (Justin Chatwin), who Jonathan KNOWS is closeted, despite Tino’s engagement to his sexy dance partner Tina. (Guess what? He’s right!) Gilles (Raymond Bouchard) is a self-indulgent record producer who has his eyes on everybody and nobody—if someone has potential to earn him some money, like a hot young diva with absolutely no singing talent, well, he can work that, can’t he? Sure he can.

Out of the many characters, the only one that I found remotely interesting (aka likeable) was a washed-up singer named Mimi (Geneviève Brouillette). She has been left behind in the music scene, and Gilles, her producer, claims there is no market for French disco (who knew?). She is discovered waitressing by a hipster fan—you know the type that would like a washed up singer ironically these days—and is pulled off into a new direction. That direction, unfortunately, is completely off screen as Mimi and her plot suddenly disappears from the movie for at least 45 minutes, coming back only for a flaccid moment of triumph in the background of another character’s story.

I can’t blame the actors for the fact that Funkytown is basically a bore. The story itself is dull and the direction is predictable. Other than Mimi’s wasted plot, the only thing keeping me remotely interested was the music. Though some of the songs were the original versions, most of the hits were actually covers—but they were so astonishingly spot-on that I found myself distracted, listening hard for the faux divas. I couldn’t help but wonder: As one character in the film was steamrolled by someone else taking credit for her singing, is Donna Summer rolling over in her grave to hear herself mimicked so perfectly?