Gimme a Break! Season One

I just can’t seem to get tired of this show.
By Jenniferon March 16, 2014
0 Comments
Our Rating 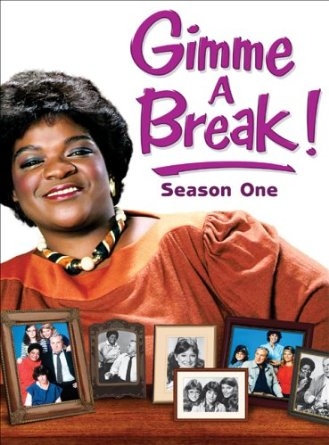 Gimme a Break! was one of the first shows to enter my childhood TV viewing schedule, though I simply referred to it as “Nell” for many years. I watched the episodes when they first aired, I watched them in syndication, and now I’m watching them on DVD. I just can’t seem to get tired of this show.

When Police Chief Carl Kanisky’s wife, Margaret, passes away, he’s left with three daughters to raise alone. Nell, Margaret’s best friend, moves in with the family to help with the housekeeping. She quickly becomes a surrogate mother to the girls, an ally to the chief, and the glue that holds the family together. The show strikes a realistic balance between serious issues and sitcom humor, and was never too wholesome for its own good. Even by today’s standards it’s surprisingly edgy.

As Nell Harper, Nell Carter is so feisty, funny, and vivacious that you can’t help loving her. She was like the fabulous live-in housekeeper I never had, and when she passed away, I felt like I’d lost a relative….the sort of relative you only watch on TV, but a relative nonetheless. Twenty-five years after the show’s debut, her wit and warmth still ring true, and you’d be hard-pressed to find another woman of her size so graceful and light on her feet. Man, she had spunk.

Dolph Sweet is also endearing as Carl Kanisky, and serves as the perfect foil to our boisterous Nell. His slow deadpan delivery makes you wonder if he’s even conscious, but he’s in there, all right. He’s cautious and serious, and just a bit intimidating, but he’s a teddy bear who’d do anything for his family, and that includes Nell. I absolutely love the dynamics of their relationship. They’re forever exchanging sarcastic one-liners, but they can always count on each other when the chips are down. Plus they’re the same size! Can you say “endless supply of jokes”?

Here are just a few of the hilarious and poignant things that happen in Season 1: Nell has a one night stand with Danny Glover, the Chief has a fling with Rue McClanahan, Sam thinks she’s pregnant after kissing a boy, Nell and the Chief ruin their diet with a huge pig-out, Julie tries to fit in with the cool kids and makes everybody sick, and Katie sings a shrill doo-wop version of “Do Ya Think I’m Sexy” with her group, The Hot Muffins. What more can you ask for? I still don’t know why I’m the show’s number one fan. It ran for years, but I’ve never met anyone who loves it as much as I do.

I invited my mom to watch the DVDs with me for old time’s sake, but at first even she balked, claiming, “I didn’t like any of those side people.”

“Oh yeah, like Grandpa and that wimpy police officer?”

The “side people” and their teenage antics make up a large part of the show, but as I watched, I could see her point. Lauri Hendler is dorky, untalented, and grating as Julie, the middle child with all the unfunny jokes. I always hated her. Kari Michaelson is lovely as Katie, the popular oldest sister, but she’s a little plastic, and I never could relate to her. Those two were like the pain-in-the-ass teenage sisters of everyone I knew, but Samantha (Lara Jill Miller) was something else. Tomboyish, naive, and funny, she’s still my favorite.

The Season 1 DVD set comes with nifty extra features, including a documentary on the TV shows of the 80’s and their influence on pop culture. It includes enough clips of Miami Vice, The A-Team, Knight Rider, Simon and Simon, Murder She Wrote, and Quantum Leap to satisfy your jones for these shows without actually having to buy them. There are interviews with Lara Jill Miller, Stephen J. Cannell, David Hasselhoff, and the short bus even dropped off Debbie Matenopoulos! Debbie famously accomplished the impossible when she was deemed too annoying to be on The View, and shares deep insights like, “Miami Vice is really the definitive 80’s show. When you talk about Crockett and Tubbs, EVERYONE knows who you mean.” Hear hear! I find it’s hard to get most people to stop talking about Crockett and Tubbs, don’t you?

In addition to the fun-filled documentary, there are also bonus episodes of Charles in Charge, Kate and Allie, and Gimme a Break Season 2. I ran across a review on Amazon complaining that the extra episodes are just crummy advertisements. Is he kidding?! They’re whole episodes! You can relive the cheap filming and cheesy humor of Charles in Charge without spending another dime! Way to stick it to The Man, Amazon Guy, everybody hates it when the studios throw in cool unexpected extras for free.