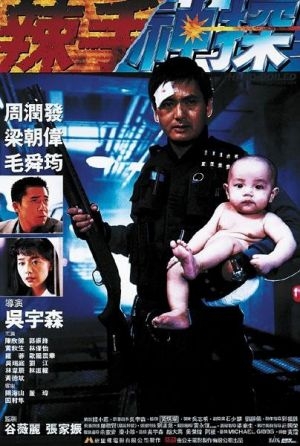 I knew about John Woo’s reputation… people have always said that his Hollywood flicks, like Face/Off and Mission: Impossible 2 just haven’t quite matched up with his earlier Hong Kong work. So this information, plus my current obsession with Tony Leung Chui Wai, put Hard Boiled at the top of my must-rent list.

Super-cool Chow Yun-Fat plays a detective/cop called Tequila (soooo Hollywood!). His partner is killed in a cafe (or is it a bird store?) shoot-out in the amazing opening scene of the movie. We get to see Chow perform Woo’s trademarked pistol-in-each-hand, flying-through-the-air-in-slow-motion moves as he pretty much single-handedly obliterates all the bad guys in the room. The audience expects no less.

Of course jaded Chow wants revenge. We are introduced to two rival gangs, who both deal with gun-smuggling (more gunfights! yeah!), and we meet a shifty character with vague loyalties (Tony! Tony!). Pretty much the action scenes involved these two gangs trying to blow each other to bits, or the police/Chow trying to blow one or both of the gangs to bits. It has been awhile since I’ve seen so much blatant carnage on screen (don’t tell the parents’ watchdog groups about this one!), but it is all done with Woo’s style of beautifully choreographed violence. Plus Woo often orchestrates the scenes so the bad guys are in black, and the good guys in white, or vice-versa, so the audience doesn’t get confused (very convenient).

The film culminates in one of the most astonishing action sequences I think I’ve ever seen: The action takes place in a hospital, where the bad guys have cornered the good guys, they all have access to a lot of guns, plus there are hundreds of patients and newborn babies in the way to up the ante. The climax lasts a full 45 minutes, without pausing at all for breath! Very impressive!

Hard Boiled doesn’t really break new ground as far as plot; it is really nothing different than you might see in a Hollywood action film. The character development leaves a bit to be desired, but the charisma of Chow Yun-Fat and Tony Leung Chui Wai manages to keep your attention glued to the screen.

Where Hard Boiled really shines is in its super-cool style and jaw-dropping action sequences…. It is a visual treat for jaded fans of Hollywood action flicks. Delve into the older releases at your local video store and check this one out!