Despite the chases and shoot outs, Heat is very much about the families and personal lives of these cops and robbers.
By Jenniferon February 8, 2014
0 Comments
Our Rating 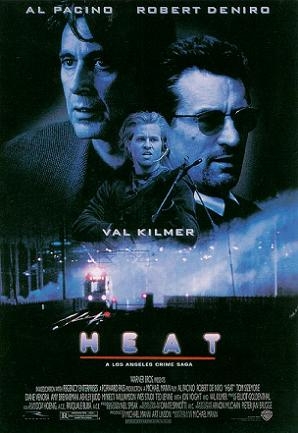 Heat begins with a love scene between Al Pacino and Diane Venora so steamy that it makes me weak in the knees just to think about it. I can’t believe she got paid to be kissed like that by him! Vincent Hanna (Pacino) is not only a good kisser, he’s a dedicated police lieutenant who says what he means and does what he says. Yes, work takes up a lot of his time. Sure he’s frequently late for dinner, and no, he doesn’t want to share that, “some junkie fried his baby in the microwave because it was cryin’ too loud”. But he holds his marriage in high esteem, and he warned his wife that she’d have to share him with every bad guy in the city.

In this case the bad guys are a team of armed robbers including Robert DeNiro and Val Kilmer, who wreak havoc in a carefully planned crime spree. Thank goodness everyone in Heat is famous, because there are so many characters it would be easy to lose track of a cast of unknowns. Ashley Judd plays Val Kilmer’s wife. She is his rock, but she’s getting tired of their unstable lifestyle and is turning a wayward eye toward Hank Azaria. Robert DeNiro’s sick of being alone, and takes a chance with Amy Brenneman. Their relationships are bound to suffer, because these men must always consider one important rule of the streets: never become attached to anything you can’t leave in 30 seconds if you see the heat coming around the corner. As the heat, Vincent has trouble keeping attachments that can’t be left when he spots the bad guys.

All of this is just too much for Justine, Vincent’s needy lump of a wife. She keeps making long, over-analyzed arguments as to why their marriage is a sham, and her behavior begs the question, “Are you on crack?!” Actually she’s on a combination of grass and Prozac, but still, you don’t leave a man because he’s too good. Who’s going to comfort the guy who’s always picking up the pieces for everyone else? Damn it, write me into one of these movies and I’ll do it… Not that I’m bent out of shape over what one fictional character did to another or anything.

While Justine wallows in self-pity, her daughter Lauren (Natalie Portman) slowly goes off the deep end. You can tell she’s a basket case when she has a fit over some misplaced barrettes, but even I didn’t anticipate the turn of events that would bring Vincent to her rescue in the best damsel in distress scene since I don’t know what. Just when I thought this movie couldn’t possibly get any better, it culminates in a showdown between Pacino and DeNiro, who prove that men on opposite ends of the legal spectrum have more in common than one might think. These two actors (particularly Al Pacino) have the rare ability to convey what they are thinking without saying a word, and it’s amazing what they can communicate in a scene with almost no dialogue.

Despite the chases and shoot outs, Heat is very much about the families and personal lives of these cops and robbers. Not only does this add depth to the film, it allows the audience to become personally invested in the characters. Days after watching it, I’m still thinking about Vincent Hanna, his failed marriage, and what he found in the bathtub.