In a world where we seek social contact through technology, is it really so outlandish to fall in love with an operating system? 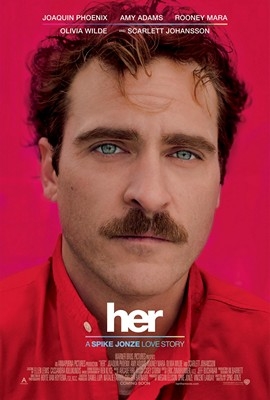 Theodore (Joaquin Phoenix) is a sweet, gentle man who excels at a job that is perfect for sweet, gentle people. In this very near-future world, Theodore works at a Hallmark-ish company that will dictate and generate hand-written personal correspondence between you and whomever you wish (for a small fee, of course). It’s so personal, that you don’t even have to be involved! Though Theodore writes love letters at work, he is kind of sad and lonely, is going through a divorce, and spends his free time playing virtual games with trash-talking animated characters.

In this version of the not-so-far-off future, Theodore is intrigued by an ad for a new operating system that operates on artificial intelligence. Could you imagine how perfect this would be? The OS can go through and organize all your files, can answer all your questions to find out exactly what you need, and can remind you of tasks and appointments–but all in a personalized way that adapts to YOU. Theodore’s new OS, who speaks in the amiable and flirty voice of Scarlett Johansson, names herself Samantha. Samantha is curious, adaptable, attentive, and even tells jokes. Theodore, unsurprisingly, falls in love.

There are many things that I loved about Her. The film is never judgy about Theodore. He lives in an impersonal world where technology is replicating and replacing actual human connection. For everyone transfixed by being “social” on their smart phones, does that ring a bell? As Theodore falls in love, (much to the credit of a lovely performance by Phoenix), you can see his face light up and the spring in his step. He looks like a happier man, and is there anything wrong with that? He confesses to his best friend Amy (Amy Adams, who is really fabulous in this), that his new girlfriend is an OS. She is kind of surprised, but admits that she herself has a new BFF in her new operating system.

This is Spike Jonze’s first full writing + directing effort. He is going for the quirk and the whimsy and melancholy that screenwriter Charlie Kaufman brought to Jonze’s own Being John Malkovich. Though this is a strong effort, and the story is rather lovely, I couldn’t help but think that the touch of someone like Kaufman could have knocked it (emotionally) out of the ballpark.

But the acting in Her is wonderful, and I must mention that the set design and costuming is stupendous. Future Los Angeles has sun-dappled sparkly skyscrapers, with the sprawl zooming by the window of a fast and modern rail system. Things (and people) are clean, and possessions are minimalist, but with a retro familiarity about it. People still go to the beach, they still go on dates, and they still wake up at dawn to go to work. What makes this future so believable is that is it so entirely possible, just a hop skip and a jump technologically from where we are now. Her is maybe a less-scary depiction of where we are going, but it definitely offers food for thought on how our tech-heavy society will be behaving when we get there.