Here’s (one of the many reasons) why I love Hot Docs: even on a Tuesday afternoon in April, when it’s windy and cold and POURING and generally miserable, weather-wise, screenings are packed-to-the-rafters full. Every film I attended yesterday was sold out – even the ones that required lining up outdoors in that soak-you-through-and-through rain. Warms my heart and, I would guess, makes the filmmakers and fest programmers very happy. 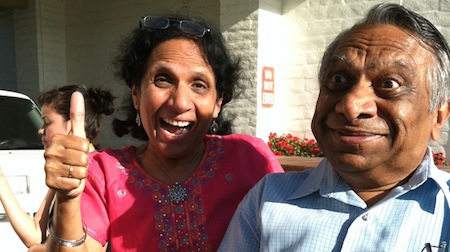 Thankfully, there was no line when I arrived (wet from the thighs down – thanks, Mother Nature!) at the Bader for my first screening of the day, so I was able to head right in. And, as promised in the pre-film intro, the lively and delightful Meet the Patels (7/8) provided some proverbial sunshine. Co-directed by sister and brother Geeta and Ravi Patel, the blessedly lighthearted and fun doc follows Ravi on his quest to find love – specifically, to find a potential wife. It turns out to be a quest that’s influenced greatly by his loving but traditional parents, who set out to arrange a match for their skeptical son, and complicated muchly by Ravi’s American sensibilities and desires.

Funny, touching and filled with surprises – not the least of which being the casting jackpot the younger Patels score in their fantastically entertaining and insightful parents (who are amazing!) – this documentary is a wonderful look at love. Its origins (Ravi’s parents are the product of an arranged marriage and are, as he says, the happiest couple he’s ever seen), its challenges and its ability to help smooth the sometimes rough edges of change and evolution. I had a smile on my face throughout… well, except for the scene so sweet and moving that it made me cry… and I highly recommend checking it out. The whole family was on hand for the Q&A, too, which was great. 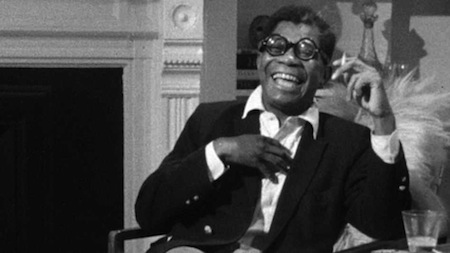 Sometimes at Hot Docs, I waffle between screening choices. I go back and forth between a couple of films until I finally just pick one. Sometimes, that decision turns up a winner and, other times, not so much. So, even though I wanted to LOVE Portrait of Jason (N/A), Shirley Clarke’s remastered 1967 documentary profiling its titular gay hustler and cabaret performer, I didn’t. In fact, I walked out. Not because the film was bad – it’s regarded as a masterpiece, says Hot Docs – but because it’s one very very long monologue. Jason sits (or stands) in what appears to be a living room, and just tells one story after another in long, unbroken, single takes. He performs characters from his past, and offers momentary glimpses into his life, but as the film went on I found my mind wandering more and more. It was a bit like watching your most theatre-y friend, who always needs to be the centre of attention and who thinks himself the most entertaining person alive, talk endlessly. After about 50 minutes, I gave up and went to get lunch. 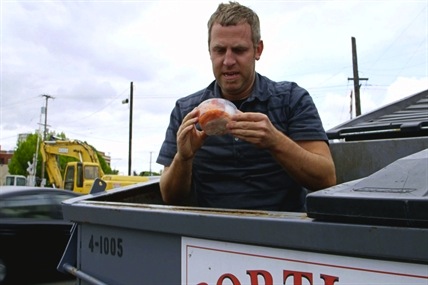 My next film was Just Eat It: A Food Waste Story (6/8), an eye-opening doc that explores the issue of discarded food in North America. Namely, how much we, as consumers, throw away on a daily basis. In addition to expert interviews, a slew of statistics and shocking footage of the epic amounts of perfectly good food that’s discarded (by consumers, manufacturers, growers and retailers), filmmakers Grant Baldwin and Jenny Rustemeyer decide to embark on an experiment: live on nothing but discarded food for six months. It’s dumpster diving at grocery stores and shopping for expired or culled items only.

By placing themselves on the receiving end of others’ waste (and, to be clear, by “waste” I mean “wasted or surplus food,” not “garbage”), Baldwin and Rustemeyer are able to illustrate their point very clearly, discovering (as the audience does) the sheer volume of stuff that’s tossed, and their personal efforts complement the film’s array of facts and figures perfectly. It forces them to get creative… and eat a LOT of eggs. The result is nice combo of human-interest film and issue film that distills something huge into something relatable.

Just Eat It was preceded by a perfect little short called The Chinese Rice Krispie Square (7/8). Director Xavier-Justin Nagy simply lets his camera roll as a street vendor in a rural Chinese town prepares a puffed-rice snack from scratch by the side of a road, using rudimentary tools. It was a brief (five minutes long), non-narrated, unscored, basic but lovely bite-sized portrait. 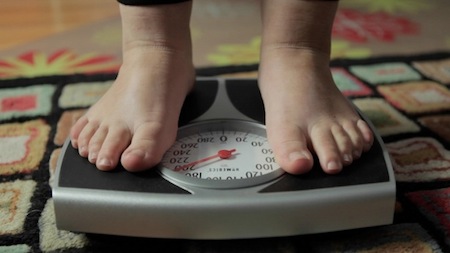 And then came my final film of the day, which I’m still not entirely sure I’ve digested properly. Pun intended. Fed Up (4/8) was described in the official festival program book as “a provocative exposé of the food industry, deconstructing tactics and media campaigns employed to avoid nutritional regulation while maximizing profits.” Hmm. Interesting. Because the majority of the film seemed to be about the evils of sugar, and the epidemic of obesity in America. And it wasn’t really much of an “exposé,” since all the information presented in the film has already been widely reported elsewhere previously and, in some cases, a while ago.

Narrated by Katie Couric (who also produced), the doc follows a number of obese children and their families as they struggle with weight issues. Director Stephanie Soechtig wraps those stories in her examination of the processed-food industry, and how sugar – which has found its way into just about every processed food we consume – has been proven to be as addictive as cocaine, and the source of countless health problems.

But there is so much going on in Fed Up that I was never really sure what the film was about. Was it about obesity? Was it the processed-food industry? If so, why was there absolutely nothing about sodium, and its prevalence/evils? It’s just as bad as sugar, but there was nary a peep. Several times, the filmmakers also seemed to drop the ball or shoot their own arguments in the foot. One of the kids in the film talks about eating healthy and exercising, but still not losing weight – yet the one time she’s shown eating on camera, she’s eating a burger and fries. There was much in the film about the cocaine-like addictive qualities of cocaine, yet the filmmakers issue a “Fed Up Challenge” at its conclusion, encouraging viewers to remove sugar from their diets for 10 days. Would you tell a cocaine addict to just give up cocaine for 10 days? (I realize it’s not the same thing, but you get my point.)

Don’t get me wrong, I know sugar is toxic. I completely understand and appreciate the filmmakers’ efforts to inform and educate the public on a serious health issue. The film just didn’t work for me. I don’t know that any of what it contained was revelatory in any way, and I wouldn’t call it an “exposé.” (And it could just be me – I met a couple of women in line today at another film, and they both loved it. So, there you go.)

My other issue with the Fed Up screening had nothing to do with the film itself, but with Heather Reisman, founder and CEO of Chapters/Indigo Books, being presented as one of its executive-producers. She was brought out onstage beforehand to introduce the film, and talked about how much its production had affected her, and how customers will see changes at Chapters/Indigo stores, especially with regard to cookbooks.

What does that mean? Will her chain of bookstores no longer carry dessert cookbooks? Cookbooks with recipes that include sugar? Will vegan and vegetarian cookbooks get prime real estate in the stores? Should Anna Olson be worried?

More importantly, will Reisman’s stores – her bookstores – stop selling the chocolate, candy, cookies and confections it currently stocks? What about all the Starbucks franchises they contain? Almost every single Chapters/Indigo location is also home to an embedded Starbucks franchise, where customers can buy any number of sugar- and fat-packed snacks and drinks. Will those all be shuttered, since the majority of their products fly in the face of Fed Up’s whole message? The smallest, most basic Frappuccino, for example, is loaded with 36g of sugar. A venti Java Chip Frappuccino? An astounding 80g (!!!!).

My guess is that all of those things will still be available at Chapters/Indigo, for the same reason Pizza Hut and McDonald’s sell their wares in school cafeterias in the U.S.: the bottom line. There is too much money to be made from the sale of candy and snacks, not to mention the Starbucks deal, for either to be removed. According to this article, Reisman ordered the removal of candy from her stores’ checkout area. That’s it, though… and only as of two weeks ago (with Fed Up’s world premiere looming, and the inevitable spotlight shining on Chapters/Indigo merchandise – coincidence?).

Isn’t that a bit like McDonald’s offering apple slices alongside its Quarter Pounders and McFlurries… and then claiming they’re promoting healthy eating?

It will be very interesting to see if Reisman is held accountable for her promise – by both the public and by the filmmaking team. 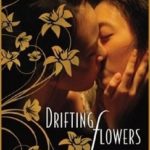