Some days at Hot Docs are better than others. They’re all pretty great, but some are weirdly extra-wonderful. That was today.

Though the weather was once again grey, wet and dismal, I headed out early to get in line at the Bader. My first film of the day was The Case Against 8 (8/8), and I was anticipating a huge turnout. I arrived just after 9:30am to find a very very small lineup, and my pals standing right at the front. We chatted and compared notes on Fed Up (because it was still gnawing at me) and, as we stood there, a guy who looks a lot like Michael Gross – of Family Ties fame – walked by and joined the line. Now, I’d seen this fellow at a screening on Sunday, but (at the time) wasn’t sure it was actually Michael Gross. This time, I knew it was him. Cool!

We filed in and I was surprised how empty the theatre was. Even as showtime inched ever closer, the theatre was maybe half-full. Weird. Every time I think I know Hot Docs audiences, they surprise me. Who knew? 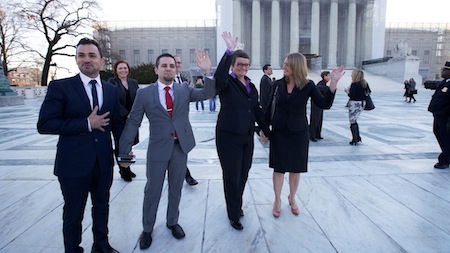 The film, co-directed by Ben Cotner and Ryan White, tracks the court case challenging California’s Proposition 8, which banned gay marriage and invalidated thousands of same-sex marriages that had taken place in 2008 six months prior. The American Foundation for Equal Rights and two couples – Jeff Zarrillo and Paul Katami, and Kris Perry and Sandy Stier – set out to appeal, and repeal, Prop 8.

Fascinating, frustrating and triumphant, this stirring documentary has all the makings of an Oscar-bait drama (I was actually casting it in my mind, because I’m convinced this will be made into a dramatic film someday). Though everyone knows how it all turned out, the behind-the-scenes machinations and how it all unfolded on a day-by-day basis makes for riveting, and incredibly moving, viewing.

Both directors and both couples were on hand for the screening (though Perry had to jet off immediately after introducing the film), and the post-screening Q&A was delightfully lengthy. One plea to programmers and Q&A moderators: please stop calling on the guy in the slogan-covered white T-shirt. He shows up everywhere, always shoots his hand to the heavens to ask a question and, inevitably, proceeds to pose a long, rambling comment-turned-question that rarely has anything to do with the actual movie at hand. (At Case…, he asked the panel of guests to comment on divorce rates. *sigh*)

As was the case with The Homestretch earlier in the week, I saw Zarrillo and Katami in the lobby after the screening, and really wanted to say hello… but was worried I’d get a huge lump in my throat. I was going to leave, but one of my friends said, “Let’s go!” and made a beeline for the couple. So, of course, I followed. And, as a result, got to shake hands and chat briefly with two men who helped changed the course of American history. How often does that happen? It was one of the all-time highlights of my 20+ years of film-festival-going.

As an aside, I’d also like to once again extol the virtues of Myrocia Watamaniuk – holy hell, she rocks as a moderator. Her introductions are always well-informed, colourful, enthusiastic and made without ever reading off a sheet of paper or sounding rote. She, Angie Driscoll and Sarafina DeFelice (who seems to be scarce this year) are terrific, and should really give a Master Class in screening moderation to programmers and festival staff everywhere – for TIFF folks, especially. They’re all awesome, and I’m always happy when one of them appears onstage before a film. Thanks for all your hard work, ladies!

The next order of the day was lunch. I jokingly said I wondered what Michael Gross would be seeing next and, as we walked along University Avenue, I heard one of my pals say, “We were just saying we wondered what you were seeing next!”

I turned around and there was Michael Gross.

He walked with us to Bloor, chatting about Hot Docs (he’s in town shooting and goes to screenings on his days off). Such a nice guy! When we parted ways, we realized we should have snapped a photo together, so we darted across the street, caught up with him and he was more than happy to oblige. If I see him at any subsequent screenings, I’ll totally let him cut in line.

We proceeded to lunch at Whole Foods, and my pals paid for my meal – so sweet and generous! thank you! – then it was time for me to make my way to Hart House for my second and final film of the day. (After a four-screening Tuesday, I knew I’d have to ease up on Wednesday.) 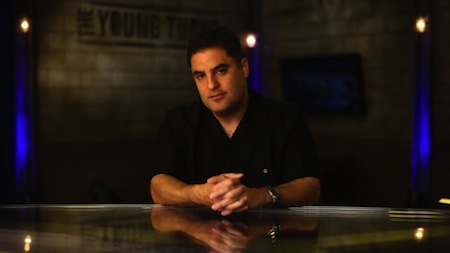 When I initially browsed the schedule, there were no “must-see!” films on deck for me Wednesday afternoon. There was, as ever, much waffling on my part, and I ultimately chose Mad As Hell (6/8) because it started fairly early and meant I wouldn’t have to kill hours of time between screenings. I knew little about it, but had watched the trailer the previous night and it seemed like it could be interesting.

The film profiles on-again/off-again political talk-show host Cenk Uygur (pronounced “chenk YOO-gurr,” for those of you – like me – unfamiliar with the progressive, opinionated and passionate founder of online sensation The Young Turks), who goes from cable-access obscurity to guest hosting on MSNBC… and all points in between. Director Andrew Napier, a former intern at TYT, follows Uygur over several years, and through a number of successes and setbacks, to paint a portrait of a super-determined guy who likely will achieve his lofty goals (namely, having TYT become a global news source rivaling CNN).

Both Napier and Uygur were on hand for the sparsely attended screening – and so was white T-shirt guy! geez! – and fielded questions from the audience afterward. Thing is, though, Napier did what I’m seeing more and more filmmakers do at Hot Docs: pander and plead for audience-award votes. I don’t know how many times he encouraged the crowd to “vote 5!”, but the more he did it the more respect I lost for him as a filmmaker. Sure, every director would like to score well and win the fest’s audience award, but to keep saying you want to win feels desperate… and is kind of annoying.

Hot Docs audiences know what they like, and if they like your movie they’ll rate it accordingly. Fear not. Please don’t campaign for votes. It doesn’t work.

At the end of the day, I headed back into the rain and toward the subway and, en route, found a token – free ride home! Yay!