Festival fatigue is beginning to set in. Darting from film to film, standing in long lines for long periods of time, eating poorly, sleeping too little and then getting up to do it all over again the next day – in the rain – is tiring. But we’re in the home stretch!

My first film of the day was another one I’d earmarked early as a must-see, because I’d loved director Cullen Hoback’s previous film, Terms and Conditions May Apply (which tackled internet privacy). This time around, in What Lies Upstream (6/8), Hoback takes on the 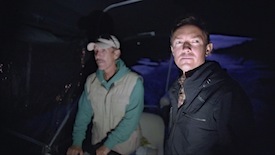 issue of contaminated water, honing in on Charleston, West Virginia (part of an area affectionately known as “Chemical Valley”), where licorice-scented tap water revealed toxic river contamination courtesy of a nearby Freedom Industries plant. But by pulling on this particular environmental thread, Hoback soon unravels a much larger problem involving lobbyists, lawmakers and private interests, with corruption and coverups entrenched from the local level all the way up to the EPA. With dogged and decidedly pleasant determination, Hoback tries to get answers, and his film will certainly open the eyes of many to the somewhat lax and weakly enforced clean-water regulations in the U.S. My only fear is that the film will make people across the States (and possibly elsewhere) terrified to drink their tap water, which would play right into the hands of bottled-water manufacturers – themselves a huge a problem when it comes to the environment and eco-friendliness.

The eco-centric vibe carried over, sort of, to my next screening, which began with Cargo (3/8), a student film that probably plays much

better on a small screen than projected 25 feet high. Why? Because the entire film (25 minutes long) takes place on a freighter in the middle of the ocean, and there are countless scenes where the horizon swoops up and down with the waves… making it exceedingly nauseating to watch for anyone prone to motion sickness. The film apparently explores the themes of loneliness and connection through the eyes of the workers on the freighter, but the dialogue is all in foreign languages and I had to close my eyes so often that I couldn’t read the subtitles. There were a few really cool shots I did manage to see (a wall full of wrenches swaying wildly due to bad weather), and I can appreciate the filmmakers’ effort, but I did not connect with the story at all due to execution. 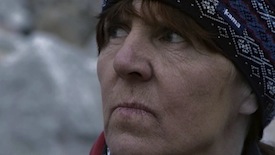 That film was paired with Woman and the Glacier, which I’m choosing not to rate for two reasons. Firstly, because I walked out about 45 minutes in, and secondly because one of my fellow filmgoers caused me to question my interpretation of the film enough that I don’t think it would be fair for me to weigh in with slices. Based on the official Hot Docs description, I thought I was going to see a documentary about a Lithuanian woman who’s spent the past 30+ years living in solitude atop a glacier, conducting research. I thought I would learn about who she is, how and why she does the work she’s doing, how she survives in a such a harsh environment with only a dog and cat to keep her company, and so on.

Instead, what I got was a dialogue-free nature film about the glacier, with very little about the woman living upon it. In fact, her name is never mentioned and she doesn’t even speak on camera until 35 minutes in (!), and even then it’s just a couple of sentences about potato pancakes. There was long, slow take after long, slow take of the glacier (above it, below it, inside it), or the woman hiking, or a Lithuanian busker playing some kind of banjo-like instrument. I mean l-o-n-g, s-l-o-w takes. Beautiful, but (for me) incredibly boring given the story I really wanted to hear: hers, not the glacier’s. I was getting increasingly restless as I watched, and eventually packed it in to head to the Bader for my final film of the day.

While waiting for my third film to begin, I ran into one of the filmgoers I’d chatted with before Woman and the Glacier, and asked what she’d thought of the film. She LOVED it. I thought she was kidding, but she wasn’t. She went on to explain that she, like the woman in the film, has done research in isolation in the far north, and that she knew exactly what the woman was doing onscreen as she took various measurements with tools foreign to me. She said seeing and hearing the glacier melting reminded her of this portion of her past, and that she felt she got the film she was expecting.

It was a reminder that film is subjective, and that everyone brings his or her own experience to what they see onscreen. I was ready to rail against Woman and the Glacier, but this filmgoer helped me see this particular doc through her eyes… so, as I said, no rating.

My final film of the day was More Art Upstairs (5/8), a nice enough but not overly exciting look at the 7th annual ArtPrize competition in Grand Rapids, Michigan, where artists from around the world showcase more than 1,500 pieces of work in two key competitions: one 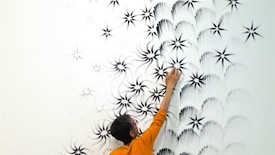 judged by art experts, the other judged by the general public. It’s a competition that awards a massive financial prize ($200K to each winner) and sees high art alongside kitsch, experimental pieces beside the traditional, huge installations side by side with framed photos you could fit on any wall, and thousands of average folks casting their ballots for the work that they like best. The doc profiles one of the event organizers and a number of the competing artists, who all discuss the work, the contest and what they get out of the experience. Though it was interesting to learn about ArtPrize (I had no idea it existed) and to get an insider’s look at how it all unfolds, there were moments I felt contradicted the spirit (i.e., that art is subjective and for everyone) of the event, especially when the organizers or judges made snarky asides about some of the entries. If the point is to celebrate art and the people who make it, deriding an artist behind his or her back while on camera just felt a little elitist and mean girl-y to me as a viewer, playing into the stereotype of pretentious art snobs. And it might be why I didn’t enjoy the film more than I did.