Well, despite my best intentions – and arriving at the Lightbox just before 11am – I was once again unable to score a ticket to yesterday’s 3:30pm screening of Honeyland, as it had (once again) gone “industry rush.” Alas! I sat down and looked through the fest schedule to browse options of what I could see in its place, but there wasn’t anything overly compelling or that I hadn’t already seen. Sure, I probably could have picked up a ticket for the making-of-Alien doc or the Parkland-shooting doc, but as tired as I already was, I feared I’d sit down, ANY film would start and I’d immediately wish I’d just gone home.

So it was that I decided my final day at the festival would consist of only one screening. (Plus, I’m leaving for a trip next week and have a huge amount of stuff I need to get done, so I between that and my existing exhaustion, I felt like I was justified in my decision. No one wants to go on holiday feeling unwell or with a list of undone tasks left on the pre-trip to-do list.)

Worried that I might somehow actually strike out twice, I immediately left the Lightbox and headed right to the Bader to ensure I’d get a ticket for Assholes: A Theory (4/8). As I got closer to the theater, I started to wonder if maybe the festival Fates were going to deny me this, as well, and my final day might wind up consisting of zero screenings. I quickened my pace and, thankfully, did get a ticket… and then, despite a weather forecast that gave only a 30% chance of “drizzle,” it started to rain. At the Bader. Where the ticketholders wait OUTside.

I ducked into the newly renovated McDonald’s on Bloor for a quick snack before getting in line and meeting up with my film-fest pal. Weirdly, I didn’t manage to cross paths with many of my usual cohorts this Hot Docs, so any chance to compare notes and catch up is great. The rain also gradually eased up into drizzle, so that was nice(r).

The rush line was very long and, by the time Assholes began, the theater was packed to the gills. There had been a LOT of buzz about this film, due in part to its cheeky title, but I’d been hearing mixed reviews from other festgoers throughout the week – some people loved it, some thought it was “okay,” some didn’t think it was that great. 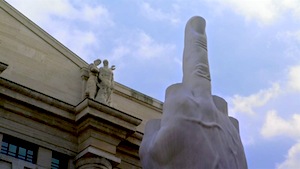 By the time the film ended, I realized I fell somewhere between those last two groups. Because while it initially gets off to a lively, funny, fast-paced and interesting start, the doc – which is based on the book of the same name by Aaron James – gradually slows down and gets mired almost entirely in internet culture. The second half of the film deals almost exclusively with online “assholery,” its relationship to politics and how trolling has become the domain of assholes. There was nothing really new or revealing in that second half – anyone who’s ever been online or read an article about the internet already knows much, if not all, of what was being discussed. Yes, director John Walker throws in some comments from John Cleese along with assorted clips from movies and TV shows where characters discuss assholes, but I felt kind of underwhelmed by the film as a whole. (GET IT? AS A WHOLE? Ha ha. Sorry.)

And with that, Hot Docs 2019 drew to an inauspicious close for me. It was another fabulous festival, with a ton of great films, fun line chats, interesting people and good times. It remains my favorite 10 days of the year, and I’m already looking forward to #HotDocs20!