Ahhhhhhh, it always feels SO good to step back into the world of Hot Docs after a year apart. Perhaps owing to the fact that it was only the first full day of moviegoing, everyone I encountered – from fellow film fans to volunteers and staff – was in a super-great mood. Fabulous line chats were had, with many people sharing the films they were most excited to check out, and (thankfully) the heavy rain that started the day had finished by the time I had to stand in line outside at the Bader for my first official screening of the festival.

An increasing trend in documentary subject matter in recent years has been the obscure competition: that is, introducing audiences to competitive events worldwide that we might not otherwise have realized are “a thing.” It started with 2002’s Oscar-nominated spelling-bee doc Spellbound, which has spawned dozens of similarly structured films over the past 17 years. Some are fabulous, some are duds, and my inaugural Hot Docs 2019 screening fell somewhere in between.

Well Groomed (4/8) trains its lens on a handful of American dog groomers competing for “creative grooming” accolades at assorted competitions across the States. It’s the arena in which dogs are dyed and styled in outrageously colorful fashion, snipped and slicked with elaborate and intricate detail. On the surface, it sounds like it would make for a super-kooky and fun doc, but director Rebecca Stern’s film feels kind of flat – the “characters” we follow aren’t especially compelling or crazy, and there’s no real tension (which is a key element in a competition doc) to be had in the film as all the competitors actually get along and like each other, even rooting for each other’s success. 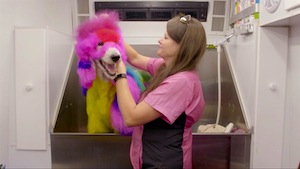 The subjects speak about the competitions as if they’re these massive high-stakes global events, but everything we see in the film – save for a brief clip or two of creative-grooming runway shows in Asia – feels very small-scale, niche, distinctly American and kind of podunk-y. Even the “world championship” looks (in the film) as though it only really has six or seven competitors, all of whom are from the U.S. There are story threads that are introduced but never resolved – one novice groomer opens her own grooming business that seems to get off to a very rocky start… but then we never find out how that pans out. While the doc does shed light on the practice of creative grooming (all the products used on the dogs are safe and non-toxic, so don’t panic when you see a purple poodle) and the obvious affection these groomers have for their canine companions, I couldn’t help but leave the screening sharing the sentiments of a talk-show audience member whose comments appear in the film: despite their claims to the contrary (that the dogs actually enjoy looking like garish parade floats), it feels a lot like the groomers are seeking attention for themselves by creating attention-grabbing hairstyles for their pets.

Perhaps unsurprisingly, many of the people I saw in line at Well Groomed also turned up for my next film, director Heddy Honigmann’s sweet and touching Buddy (6/8). Following six service dogs and their respective owners over the course of about a year or so, the doc reveals the profoundly powerful – and incredibly moving – bond that can emerge between humans and animals. 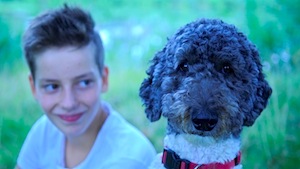 Each dog owner has unique needs – among them, an incredibly active and vibrant 86-year-old blind woman, a young military veteran suffering from crippling PTSD, and an autistic boy with a number of physical challenges – and each one has a devoted service dog with its own unique, complementary skill set. Unfolding slowly and melodically, the film offers a glimpse into how these people’s lives have been changed and enhanced by their dogs; not a lot actually happens (in terms of dramatic moments or shocking revelations) in the film, but it will no doubt be affecting to anyone who’s ever loved a pet. My only criticism, and it’s a teeny one, is that there are a couple of  moments in the film that might have benefitted from further explanation: at one point, one subject is at a concert and suffers what looks like some kind of medical emergency (?), and at the film’s end, one subject who’d been walking previously is suddenly and inexplicably in a wheelchair. But, honestly, those are inconsequential questions about an otherwise lovely film. And if you don’t well up with tears at least once or twice during the film, as owners discuss the dogs they’ve loved and lost over the years, you might be made of stone. (Note: the Hot Docs Crying Headache™ this film gave me is only now just letting up. ;-)) 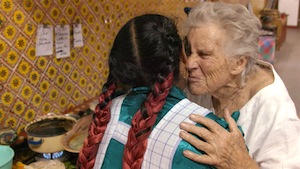 Last up was a film I selected on a whim (always a risky endeavor!), just because I needed something to fill my 6pm moviegoing slot, and I was very pleasantly surprised by Nothing Fancy: Diana Kennedy (6/8), director Elizabeth Carroll’s deliciously rich profile of the titular spitfire now-nonagenarian chef. Born in England but having lived in Mexico for decades, Kennedy has become one of the foremost (if not the foremost) authority on traditional and regional Mexican cuisine, having authored multiple cookbooks, hosted her own television cooking show and become the go-to resource for some of the most unique Mexican recipes around. The film traces her life and work, which includes her fierce advocacy for sustainable living and cooking – she lives in an eco-consciously designed home in the mountains, where everything is recycled, composted and cooked with an eye towards honoring nature. She grows her own extensive list of crops, and possesses a deep reverence for the land on which she and the rest of us live. Bonus: she’s a real character, who speaks her mind, sticks to her convictions and doesn’t care what anyone else thinks. Carroll has lucked out with the intimate access to Kennedy’s life she was granted and, in turn, audiences are treated to an unfiltered and compelling portrait of a culinary legend. 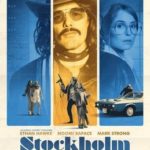