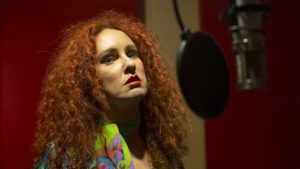 If Loretta Lynn and Janis Joplin had a baby, it might just be the immensely talented and wildly complicated subject of I’m Wanita (7/8). The self-professed Australian Queen of Honky Tonk, Wanita is a cigarette-smoking, binge-drinking, foul-mouthed, unapologetically outrageous and GIANT-hearted country singer with an amazing voice… and an amazingly uncanny ability to self-sabotage. Director Matthew Walker’s simultaneously fun and poignant biographical doc introduces its titular crooner as she preps for, and embarks on, a potentially career-making trip from her hometown of Tamworth, NSW, to the U.S., where she plans to record a new album at studios in Memphis, New Orleans and Nashville. Tagging along for the raucous and revelatory journey are her beleaguered best mates: musician-turned-manager Gleny and velvet-voiced jack-of-all-trades support-staffer Archer, whom Wanita quips she “found under a bridge.” Thing is, she’s probably not exaggerating: despite her irreverent behaviour and tumultuous marriage to Turkish immigrant “Baba,” Wanita has an enormously generous spirit and unguarded approach to life, giving money, housing, time, hugs, kindness and all manner of support to anyone — literally ANYONE — she meets. Filled with wall-to-wall fabulous music, and blessed with an insanely watchable and engaging central figure, this Little Doc That Could is bound to win over audiences and spark a global wave of Wanita love. (Pro tip: be sure to watch the credits all the way to the end for updates on the film’s key figures!)