There’s no shortage of great music-themed films screening at Hot Docs this year, so I checked out three more! 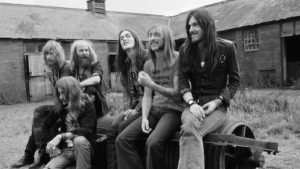 You KNOW I love a great music doc, and this spirited film from director Hannah Berryman, filled with fantastic behind-the-scenes archival footage from the 1970s through the ‘90s, feels like a cinematic kindred spirit to Muscle Shoals, which I saw — and LOVED — at Hot Docs in 2013. Like Shoals, the rockin’ doc explores the rich musical history behind a little-known (outside the industry, that is) recording studio in a remote location, but instead of a swampy bayou in the American South, Rockfield sits on beautifully sprawling, pastoral farmland in Monmouthshire, Wales. The studio launched in the 1960s, after enterprising young brothers Kingsley and Charles Ward, who had a fleeting interest in becoming professional musicians themselves, saw a potentially lucrative opportunity when they realized there were no commercial recording studios outside of those owned by record labels. So, aspiring artists wanting to cut an album were out of luck. Faster than you can say “get the cows out of the barn!”, the brothers bought some basic equipment and turned stables and stalls into recording spaces. The result was the first residential recording studio in the world (as far as they know), where musicians would live and work for weeks or months at a time — or, in the case of The Stone Roses, more than a year. Some six decades later, Rockfield has played host to iconic rock groups from Queen and Black Sabbath to Oasis and Coldplay, earning itself a reputation for delivering killer sound in a relaxed, creative space where musical magic can happen. Featuring interviews with many of the artists who passed through Rockfield’s doors, and punctuated with fantastic animation and illustration from Andy A’Court and Sarah McMenemy, Berryman’s doc serves up a satisfying slice of musical history with a colorful side of farming-family dynamics. (As a bonus, it also features something we have never ever seen captured on film before: Liam Gallagher LAUGHING!) 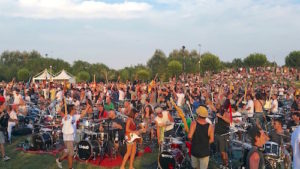 Back in July 2015, 1,000 musicians gathered in Cesena, Italy, to play Foo Fighters’ “Learn to Fly” in a bid to convince the band to perform in their town. The story of how it all came together, and what happened after the video of the group’s performance exploded on social media, is the subject of this heartfelt and cheerful celebration of artists, dreamers, community and, of course, rock and roll. Directed by Anita Rivaroli, who was there with her camera to document the entire project come together right from the beginning, the film follows key organizer Fabio Zaffagnini through every stage of the process, from putting out a call for musicians to figuring out logistics, and from working out kinks in the world’s biggest band practice to the group’s eventual electrifying performance in an Italian field. A seemingly impossible dream come true, Zaffagnini’s massive musical spectacle is just half the story. The film also tracks the aftermath, as Dave Grohl gets wind of the video and the immensely diverse members of the newly dubbed “Rockin’1000” — men, women, boys and girls of all ages, races and socio-economic backgrounds — share stories of how participating in the event changed their lives, allowing most of them, not professional musicians, to find fellowship and live out their rock fantasies. While the first two-thirds of the doc are arguably stronger than its final third, the entire film is the kind of fabulously feel-good experience that leaves you smiling from ear to ear as the closing credits roll. 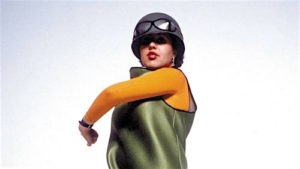 Part biography, part personal essay, part therapy session, this introspective doc tracks the life and career of Afropunk pioneer Marianne “Poly Styrene” Elliott, iconic frontwoman of British punk band X-Ray Spex. Elliott’s daughter, Celeste Bell, serves as the film’s co-director and narrator, and pieces together the puzzle of her late mother’s life by going through old photos, articles and archival footage. Just 19 years old when she founded Spex, Poly Styrene (her self-selected moniker meant to represent the disposable, “plastic” nature of pop stars) became a sensation for the social commentary in her lyrics, and for breaking both racial and sexual barriers in the punk scene. A peer of Johnny Rotten and Sid Vicious, Poly Styrene was, as the film reveals, also plagued by mental illness, and struggled under the overwhelming weight of her fame and the pressures of the industry. And while the doc gives her the recognition she deserves, it felt decidedly low-energy and flat… which (for me) didn’t gel with Poly Styrene’s electric, energetic stage presence. Bell’s narration feels strangely listless and the wording somewhat stilted, especially when compared to Ruth Negga, who voices Poly Styrene’s diary entries. As well, the filmmakers snagged interviews with tons of notable musicians of the era, but made the curious creative choice to use only the audio – so, people like Neneh Cherry, Vivienne Westwood, Thurston Moore, and scores of Poly Styrene’s peers, friends, family and former bandmates are only ever heard in voiceover, never appearing onscreen. It was distracting, and instead of feeling excited to discover more about the music and the woman behind the legacy when the film was over, I wound up feeling indifferent and, sadly, a bit bored.