One of our favourite things about Hot Docs is the way thought-provoking films spark spirited, insightful — and sometimes heated! — debate and discussion amongst audiences at post-screening Q&As and, more often than not, while waiting in line for other films. Even though the fest is virtual this year, and the opportunity to dissect great films with your fellow festgoers is more limited (alas, no line chats!), these three docs are guaranteed to get conversations started. 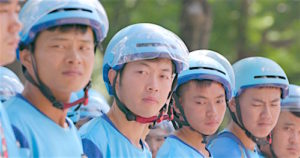 I love it when Hot Docs introduces me to a subject I didn’t know about, and that was definitely the case with director Shannon Walsh’s eye-opening look at the “gig economy.” (Confession: I had never even heard that term, and had no clue what an MTurker was, prior to watching this doc.) A must-see for anyone who uses digital-platform-based services such as Uber, Task Rabbit, Amazon and the like, the film exposes the often-harsh reality of “ghost work” in the perilous app-driven on-demand gig economy. Underpaid and largely considered disposable by the online platforms with which they’re employed (one bad review can spell immediately termination), gig workers from around the world — whose jobs range from delivering food to assembling furniture, shuttling passengers, tagging photos or just filling out countless surveys — share their struggles, stressors, challenges and tricks of the trade (a Florida MTurker demonstrates how he games the system, changing his online persona to match the most in-demand type of survey respondent in order to snag more work). Featuring commentary from, among others, anthropologist Mary L. Gray, and Prayag Narula, co-founder and Chairman of lead-generator platform LeadGenius, Walsh’s insightful, intelligent film pulls back the curtain on the social, financial and psychological hardships endured by the unseen, often exploited workforce toiling to make life easier for so many. 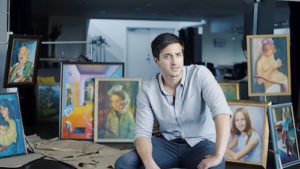 I’m genuinely not sure how much information I can give when discussing this deliciously tense whodunit (well, whopaintedit, to be more precise) from director Billie Mintz (The Guardians). The press materials keep the details pretty vague, but the root of the “mystery” is revealed pretty early on in the film itself, so anyone who watches the doc will know fairly quickly what’s going on. To safely err on the side of non-spoiling: Portrayal follows twentysomething Canadian Roman Lapshin on a global journey to unravel a long-protected family secret surrounding his late grandfather, a painter named Vladimir Dvorkin. Lapshin wants to stage an exhibition of Dvorkin’s work, but thousands of his paintings remain in the possession of another artist who, Lapshin suspects, has built a career taking credit for work he did not, in fact, paint himself. Lapshin’s family in Israel wants the past left in the past, but he and his mother want the truth to be out in the open. Is it all the product of a misunderstanding? A massive fraud? Overt theft of intellectual property? A mutually beneficial arrangement? Or something else altogether? And, in the art world, does any of it matter? Watching everything unfold onscreen was a lot of fun, and there were some fantastically nail-bite-y sequences that had me literally on the edge of my seat. While I wasn’t entirely satisfied with the film’s resolution (it felt a bit like the payoff didn’t quite equal the setup), it was nonetheless an undeniably entertaining ride. 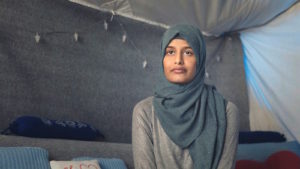 You may think you already know what your opinion is on the repatriation of Western women who left their home countries to join ISIS, but Alba Sotorra Clua’s revealing and unsettling documentary may change your mind. Set in a refugee camp in Syria, and shot over two years, the film introduces us to a group of such women — including “British schoolgirl” Shamima Begum and American Hoda Muthana, both of whom have received a lot of (largely negative) media attention — from their arrival at the camp through their rehabilitation and oft-futile efforts to get home. Lured by propaganda, marriage proposals and lofty promises of rewarding humanitarian work helping their fellow Muslims in a war-torn land, their perspectives colored by their own psycho-social issues (from teenaged rebellion to a middle-aged Canadian woman’s empty-nest syndrome), the women headed overseas… where they were promptly confronted with reality, and the true horrors of the situation that awaited them: imprisonment, beatings, sexual assaults and bearing witness to all manner of torture and brutality. The filmmakers deftly peel back the layers of each woman’s experience, gradually unveiling one unspeakable trauma after another as, over time, the women go from extremely guarded to remorseful, self-reflective and repentant. It’s a fascinating, and often heartbreaking, journey to watch, and I admittedly turned my head away at times for fear of what might be forever seared into my brain if I watched the archival footage… which is also when it hit me that these women were not afforded that same opportunity while imprisoned by ISIS. The doc will no doubt spark fierce debate, but it’s an important exposé that illuminates the atrocities these women had to endure, the challenges they continue to face, and why reinstating their citizenship deserves a closer look.