Young women around the world are pushing back against patriarchal rules, traditions and belief systems, bravely forging their way forward. And, in the case of these two similarly themed docs, they’re sometimes doing it through the sports they love. 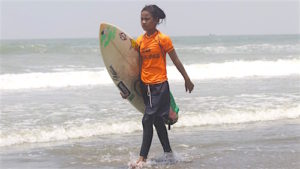 As most people know, I *lurrrrrrrve* documentaries about surfing, but director Elizabeth D. Costa’s film is unlike any surfing doc I’ve seen before. There are no sun-soaked crystal-blue waters, no breathtaking inside-the-barrel shots, no bleached-blonde towheads and laid-back vibes. No, this is a comparatively sobering film about how surfing helps a trio of fiercely determined teenaged girls in Bangladesh escape their circumstances, as they dream of riding the perfect wave towards a better, brighter, less-oppressive future. The girls are: Shobe, whose uncle literally tries to sell her to a man in another town; Suma, whose face was sliced open in a surfing accident and whose mother is ailing; and Ayesha, whose violent father regularly beats her. They ride old, chewed-up boards and are members of a small co-ed surfing “camp” in Cox’s Bazar, facing myriad obstacles including, but not limited to: abusive parents, poverty and a patriarchal society that views them as commodities or possessions, destined for marriage and child-bearing, little more. While the film feels a bit disjointed and unclear at times (in terms of what’s going on and why), it introduces a pioneering and atypical surfing community previously unknown to me, capturing the tenacity and courage of these young riders, and their commitment to navigating uncharted, but liberating, waters. 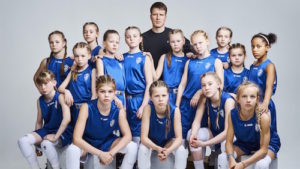 What does it take to shape a strong, independent young woman? And can it be done through… basketball? That debate is at the crux of this sports doc directed by Gudjon Ragnarsson. The film follows an Icelandic girls’ basketball team and their fiery, controversial coach, Brynjar Sigurosson, who spent time playing the sport himself in the U.S. and whose volatile coaching style is divisive, to say the least. His players — who talk about wanting to be “bad asses” — seem to adore him but their parents, who frequently sit on the sidelines as he berates their daughters on the court, often seem decidedly less impressed with his approach. (Given that he holds “trash-talking” practice, teaching his young players how to endure and dole out name-calling, belittling and the like, it’s not entirely surprising that he’d raise a few eyebrows.) The film tracks the team over what feels like a couple of seasons as Sigurossen, refusing to coddle his players just because they’re girls, leads the team’s battle against their most challenging opponent: the Icelandic Basketball Association, who refuse them permission to play against boys’ teams for fear that boys losing to girls might be too demoralizing. While the film was engaging, it felt like it was missing a key component: hearing from Sigurossen himself. Save for a veryvery short segment, there are no interviews with him to be found herein. And given what a colorful, crucial-to-the-narrative figure he is, it would have been nice to hear what he has to say.