Before we get into today’s screenings, I have a question about the Lightbox 1 balcony. Namely: does anyone know why that balcony is always kept closed until just before the film starts? And sometimes, kept closed throughout a screening?

Those are some of the best seats in the house, and ticketholders filing into that theater should, in theory, be able to sit up there, no? Sometimes, the balcony is opened up juuuuust before the screening is about to start… which means the folks in the rush line and any other ticketholder hurrying in at the last minute get access to those premium seats, while many ticketholders who arrived maybe five or ten (or 40) minutes earlier are stuck sitting in the (comparatively less ideal) seats in the first few rows because they were told the balcony would be closed. 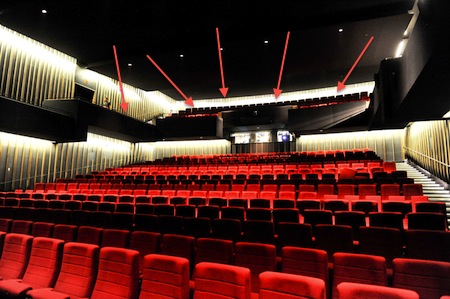 Yesterday, when I asked, one volunteer actually said to me, “There are plenty of good seats on the main floor.

That’s fine, but also kind of beside the point. Some of us like those balcony seats much better, and really want to sit in them. Why should only the last-minute attendees be allowed that privilege? Why isn’t the balcony open ALL the time? I get it, sometimes a film is somewhat poorly attended and the main floor winds up barely half full, so seating already abounds, but still. There are always a slew of volunteers milling about, so I don’t think it’s a staffing issue.

And then on the rare occasions when the balcony is opened, NO ONE ANNOUNCES IT. (Cue: sad trombone.) I’m pretty sure the grumbly folks who very reluctantly sat themselves way down up front (because nothing else on the main floor was free) would gladly scurry upstairs to much better sightlines if only they knew they could. Instead, unless they’ve turned to face the back of the theater, they have no idea those sweet, sweet seats are now available. Likewise, people like me – who’d be delighted to give up a main-floor seat for one upstairs – are also left in the proverbial dark. If volunteers and staff can shout that people should wave if there’s a vacant seat nearby, could they not also shout, “Attention! The balcony is NOW OPEN!”? It would take three seconds and make SO many people SO very happy.

There are still many days left in the fest, so here’s hoping that balcony sees some (more) use! 🙂 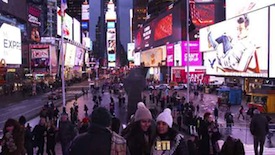 Why is this top of mind? Because both of my films today were in Lightbox 1, and they only opened the balcony just before my first film, You’re Soaking in It (7/8), a fantastic and fascinating look at how big data has changed the advertising industry. (As an aside, it makes the perfect companion film to Terms and Conditions May Apply) Featuring interviews with Madison Avenue experts and legends, along with reps from many of the internet’s biggest players (Facebook, Twitter, Google and the like), the film begins by telling us what most of us already know: nothing we do or click online is private – ever – and everything we look at is tracked by dozens of third-party sites, bots and eyes. It then goes on to reveal just how this new normal has affected the way advertising agencies and marketers approach their work: through metrics, algorithms and math, all geared to make us buy things. I consider myself relatively well-versed in this area, but even I watched, mouth agape, as the extent of advertising’s reach, influence and pervasiveness across the Web and on every device was discussed and dissected… especially when it was a class of super-smart middle schoolers were doing the discussing. The fact that these hyper-connected preteens are not only cognizant of how and where they’re being targeted by marketers, but can articulately explain it all to the camera (?!) was amazing. This doc is a must-see for just about everyone.

It was preceded by a short called Canada The Good?, which was good but sort of hard to rate because it was only five minutes long, and one episode in an anthology series of shorts called Brand Canada. It explores – through animation – the Canada’s reputation of being a “good” country. A good place to live. Good to the environment. And so on… and whether it’s all justified. I enjoyed it, and look forward to seeing the rest of the series when it debuts next month. 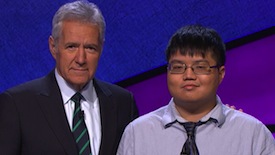 Next up was Who is Arthur Chu? (5/8), a sort of existential-crisis-y biographical look at the titular 11-time Jeopardy! champion-turned-social-justice-advocate, who earned a rabid – and often repulsively racist – online following after his stint on the show. The doc explores Chu’s own struggle with who he is, his cultural identity, what he wants out of life, and the challenging relationships he has with two key members of his inner circle: his father and his wife. Home movies, archived Tweets and Chu’s published articles on hot-button topics, along with an extensive sit-down interview, help filmmakers paint a portrait of a self-described angry nerd who says he feels like he’s never quite fit in, but who also seems fine with not really making efforts to do so. The problem, though, is that Chu comes off as emotionally unavailable throughout the film – there aren’t many smiles or laughs, certainly no tears or rage, just a measured, even tone no matter what he’s discussing or what’s happening around him. As a result, as a viewer it’s kind of hard to connect with him, or to have your heart as engaged as your head. The only scene that came close was a family visit to Chu’s late-grandfather’s grave. Otherwise, I spent much of the doc interested, but not invested. (And just in case anyone is expecting the film to reveal how Chu managed his amazing game-show run: it doesn’t.)