Ice Age: Dawn of the Dinosaurs

Ice Age: Dawn of the Dinosaurs never matches the fun of the opening scene where the indefatigable Scrat, the saber-toothed squirrel, once again tries to get that g-d acorn. 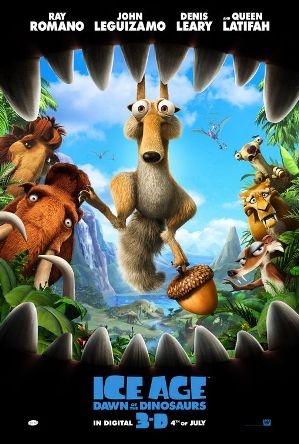 The best thing about Ice Age: Dawn of the Dinosaurs is the introduction, which served as a trailer for the film, and plays like a fabulous short film. Scrat the saber-toothed squirrel has found his elusive acorn, only to be confronted by an impossible nemesis: a girl squirrel! chaos ensues, involving Roadrunner vs. Wild E. Coyote like plunges from cliffs and such carnage. Unfortunately, the rest of Ice Age: Dawn of the Dinosaurs never really matches the fun of the beginning.

The titles of the DVD chapters give you a good idea of what to expect from this third installment of the Ice Age series: Having a Baby, Sid’s New Family, Baby Dinosaurs, Parenting Dispute, etc. It’s all about family as woolly mammoths Manny (Ray Romano) and Ellie (Queen Latifah) are expecting a baby woolly. Their saber-toothed tiger buddy Diego (Denis Leary) is feeling ostracized, like so many singletons around breeding pals. Sloth Sid (John Leguizamo), in the meantime, decides he wants his own family, so he steals some supposedly abandoned eggs. They are very large eggs. And when they hatch, Sid is now “mom” to three baby dinosaurs.

I believe this is called jumping the shark.

I guess the Ice Age era isn’t interesting enough to sustain three feature films, so the filmmakers rubbed their chins thoughtfully and said, “Hmm…. well, what else do kids like? Dinosaurs!” To explain the improbably presence of dinosaurs in the ice age (they are never labeled as anything more specific than “dinosaurs”—though sharp kids will spot T-Rexs, raptors, pterodactyls, and more), it is shown that this dinosaur world lives, preserved-like, under the ice. Like a tropical Garden of Eden that happens to have an ice ceiling, see? Um. OK.

When Sid’s kids are grabbed by their real dinosaur mom, he follows them all to the glorious dinosaur underworld to rescue them, and the Ice Age crew follows to rescue him. Along the way, they meet a wisecracking new character called Buck (Simon Pegg), who is an eye-patched weasel living in the dinosaur land. Because I suppose if dinosaurs can survive running around under ice, well, why not a weasel?

It is all about what makes a family (of course they are ALL a family!), and just about everyone has to almost die several times to figure that out. Even mama dinosaurs are just trying to take care of their kids, because there is always someone more scary out there (this time named Rudy, who is a really big scary dinosaur).

These kinds of animated movies that convey a well-meaning message via a kind of scary story are strange and kind of exhausting to me. Personally, I prefer the goofy and (most importantly) non-speaking character of Scrat. With his singular goal of getting the acorn (a goal that everyone can relate to), he is the most sympathetic and pathetic character, and is easily the most fun to watch. When Scrat goes missing from the screen, I found myself easily bored.

The second disc is a pile of Scrat-heavy extras. There are two shorts “Gone Nutty” and “No Time For Nuts”, both of which were on previous Ice Age DVD releases, and both of which are funnier than the movie itself. There are also a handful of behind-the-scenes featurettes, Scrat faux-docs, a music video of “Walking the Dinosaur, and filmmaker commentary, among the tidbits. When you insert the DVD into your ‘puter, you also have the option to play the games “Bubble Trouble,” “Scrat Pinball,” and “The Egg Shell Game”.