Literalizing the “voices inside your head”, Inside Out is the latest sweet Pixar ode to childhood innocence (and loss) that will appeal to kids and adults alike. 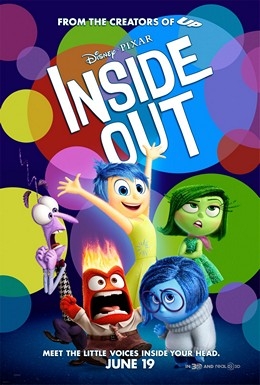 When her idyllic family moves to San Francisco from Minnesota, 12-year-old Riley (Kaitlyn Dias) is put into a bit of a spin. What may appear to everyone else as a bit of homesickness combined with lashing out, turns out to be a result of the voice, errr… the emotions inside her head. Sitting at a control panel reminiscent of Star Trek, Riley’s various emotions jostle for dominance of her temperament. Pixiesh Joy (Amy Poehler) triumphantly claims success for Riley’s heretofore happy childhood. Sadness (Phyllis Smith) feels like she is in the way, and unintentionally ruins perfectly good memories. Fear (Bill Hader), Anger (Lewis Black) and Disgust (Mindy Kaling) are pretty much kept at bay, as Riley has a pretty darn good life. After some overly enthusiastic jostling of emotional dominance, Joy and Sadness end up getting sucked into the deep recesses of Riley’s brain, leaving the others in control (or out of control) of the kid’s emotions. To Riley’s parents, she has lost the spark in her that made her a happy kid.

Inside Out turns mind and memory into a colorful maze of recesses of colors, with rows and rows of stacks and stacks of colored marbles representing memories, both big and small. Blue is a sad memory, yellow is a happy memory, etc. When Sadness brushes against an existing happy memory, it turns blue (much to the dismay of the optimists in the world). As the characters of Joy and Sadness try to make it back to headquarters (symbolically very far away, which any grim adult can relate to), they encounter workers purging disposable memories, resurrecting random ones, and tossing others into a pit where they will never return. Kind of depressing.

Inside Out made me think of an Eternal Sunshine for the Spotless Mind for 12-year-olds… and their parents that want them to stay that way. (I loved, and was more moved by Eternal Sunshine for its melancholy sweet sadness.) Maybe I don’t remember my childhood as being a world of happy hockey games and goofy memories, but I can see how this film could touch a nerve with apprehensive parents that don’t want their kids to lose their childhood innocence. On my end, it was cute and sweet, even if ultimately it was a Point-A to Point-B adventure.

NOTE: Pixar films always open with a short film, so I have to point out that I loved, loved, LAVA-ed the opening short called Lava (full pie!). The emotional peak (no pun intended) for me of the whole Inside Out movie experience happened in the five minutes before the film, as I watched a gorgeously animated volcano sing a sweet song of loneliness, and how he just wanted to be lava-ed. Cutest. Thing. Ever.