Jodie Foster talks about Mel, spiritual crises, and her new film The Beaver 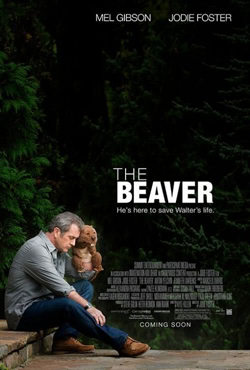 In The Beaver, Mel Gibson plays a man named Walter Black who has hit rock bottom. His wife Meredith (Jodie Foster) has just kicked him out of the house, and his eldest son (Anton Yelchin) is mortified that he and his dad are more similar than different… in all the bad ways. Depression is killing Walter, but after a drunken night of dumpster diving and a botched suicide attempt, Walter shows up back on his family’s doorstep with a beaver puppet firmly entrenched on his arm. Walter’s personality has been shoved aside—The Beaver is now speaking for him. And The Beaver happens to sound eerily like Michael Caine with a jaunty cockney accent.

“They have the biggest challenge in the world, marketing this movie!” laughs The Beaver’s director and co-star Jodie Foster. And here I am, sitting across from my idol, participating in a round table interview with the two-time Oscar-winner. In person, Jodie is as petite as the rumors say, but her genuinely warm personality fills the room, which helps put this admittedly star-struck fangirl journalist at ease. Padding around the suite barefoot, she sits down cross-legged on a cushy chair to chat with us about her film, her career, and, well, javelin throwers (more on that later).

I tell Foster that the film surprised me, as it was much darker than I expected. The first half has a fable-like comic tone, but at around the halfway point the movie takes a dramatic, sad turn, leading the story down a tragic path. In addition to clinical depression, the character of Walter is also suffering from a world-weary melancholy, Foster says. “Sadness, [is a] sort of universal phenomenon as you get older…” Foster states thoughtfully. “You know, your parents age, and your friends die at 25, and your children disappoint you. What do you do with all that grief? What do you do with it and how do you handle it?”

Indeed, I mention to Foster that I’ve told friends that The Beaver is a very different film than I expected from the trailer. “It’s really hard to capture the tone of this film in a trailer… incredibly hard,” Foster says. “The big challenge is getting people in the theater. Because if you’re getting people in the theater, and telling them that it’s a ha-ha comedy, they’re gonna be really disappointed when they leave. That’s not good for your movie. At the same time, if all those people that really want to see dramas don’t even realize it’s a drama, your real audience isn’t coming to see your film!” 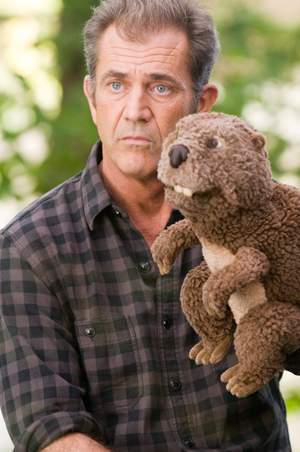 The story follows Walter as he slips further and further from his old life, while attempting a last-ditch effort to reach out to his family through a surrogate personality that is the beaver puppet. Initially, his wife brings him back into the home, seeing a glimpse of her husband through the cocky, comic, and dynamic personality coming through The Beaver. But things get much worse before we, as the audience, are given a glimmer of hope that things will get better for Walter. “I tend to make movies about people in a spiritual crisis,” Foster says. “They are not people who go through a spiritual crisis and turn bad and go South and kill everybody at a 7-11. They are people who, by virtue of attacking this crisis head-on, and not running away from it, are able to come out the other side.”

To tackle this role, Mel Gibson, who has had more than his share of very public crises the last couple years, was required to hit comic highs and dramatic lows, playing essentially two distinct characters, Walter and The Beaver. It wasn’t a stretch for Foster, as director, to reach out to her longtime friend Gibson to offer him the part. “…I know both sides of him; I know that he can play the witty side. But you do need someone who can handle the lightness and the wit… who would understand the craft of descending, and could really bring something to the film about struggle… who has that inside of him.” Early reviews show that critics are almost universal in their praise for Mel Gibson’s work in the film. “I’m just so proud of the performance,” Foster adds. “It’s an extraordinary performance by him, and I’m so grateful that he trusted me enough to really give that much of himself to it.” 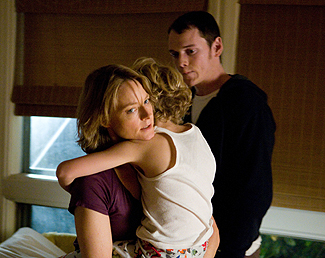 The Beaver is as much about Walter’s struggle with his depression as it is about his family struggling to deal with his mental illness. While considering actresses to play the grounding role of Meredith, Walter’s long-suffering wife, Foster didn’t have to look far. “I was really looking for somebody to anchor the film dramatically, and to be the eyes and ears of the audience in a way that Walter Black and The Beaver could not be. We know that Walter’s crazy. As a protagonist, he’s unstable. So he can’t really function as the eyes and the ears of the audience. I just had to find an actress who was age-appropriate, who I knew you’d really believe that they’d been together for a really long time, and I just was like,” (Foster sighs and laughs), “Why don’t I just do it.”

Doing double-duty as director and actor for the second time (the first was her directorial debut, Little Man Tate in 1991), Foster admits juggling the two roles is tricky. “It is hard, and it’s crazy… I mean, it really is crazy. Mel and I talk about that a lot, because he directed himself in his first film, and after he finished that, I said, ‘Don’t ever do that again!’ and he said, ‘I’m never going to do that again!’ Then he went off and did Braveheart!” she laughs. Still, after reading thousands of scripts, there is occasionally a story, like The Beaver, that will keep her up at night. She aggressively pursued producer Steve Golin, selling herself as the right director for the job. Finally, after another director dropped out, she got the movie. 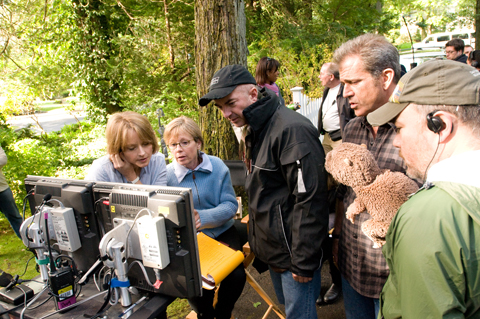 “Half the reason that I’ve made movies as an actor in the last 10, 15 years is really just to work with directors that I admire, and I look over their shoulders and go, ‘Wow. How did they do that? How did they do this? How can I tell the story with him?’ Whether it’s Spike Lee, or Alan Parker, or Martin Scorsese, or David Fincher—I think I learned more from David Fincher than anybody—[or] Neil Jordan.” She adds, “I look at actor-directors now that have the career that I wish that I had… I think of Robert Redford or Clint Eastwood… or Mel. People who had a strong identity, in some ways, as a mainstream, A-list actor, but they haven’t really chosen that path as directors. They’ve chosen a much more auteur style of filmmaking as directors, and, in some ways, weren’t tempted by becoming less of an auteur, because they already had an identity.”

I asked her if, as an actor, there was ever a type of role that she has always wanted to try, but she’s never been asked. “I’m a good bad guy, and I tend to play good guys all the time. But I’m a good bad guy,” she says conspiratorially. Pondering further, she then adds enthusiastically, “I’d like to do a movie—and I’ve felt like this for a long time—where I had to take six months and learn to do something. Learn to be a javelin thrower, or to play guitar, or speak Romanian… Some weird thing that I would learn to master, and it would take me six months to do that, and then I’d start the film. I’ve always wanted to do that, and nobody’s ever asked me!” she laughs.

For now, though, javelin training and Romanian language lessons will have to wait. What is the message that Foster hopes audiences will take away from The Beaver? “If there was a message that I wish I had when I was, you know, 18, 19… 25… 32… throughout all of my spiritual crises—my [mental] screensaver is to be solitary, and to not connect. The only way for me to connect, really, is to make movies about it. It’s too difficult for me to share. That’s what art is: It’s connection, and recognizing that you don’t have to be alone. It seems like an incredibly simple message, but I think you really examine it through the film. Here’s a man who wakes up, and the first thing he says to the puppet is, ‘Leave me alone.’ And the puppet says, ‘That’s not what you want. You want just the opposite! You need a friend!’ That’s what he was looking for all along. To be intimately known. To be known.”

[Read Moviepie’s review of The Beaver.] 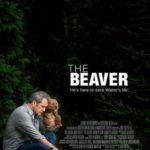