Films that I missed that may have made the cut (or not):

This would have made the list, but it is a TV show:

I totally have to plug the television series Battlestar Galactica. This is the best sci-fi, movie or TV, that I’ve seen in years! 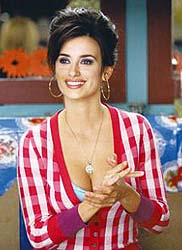 Penelope Cruz in Volver. Her breasts are practically a lead character that dare you to call them sexy. You’d get slapped upside the head. I mean, if breasts could do that. (?)

The bleating Volkswagen bus in Little Miss Sunshine. Made me laugh every time.

Poseidon—and I even paid full price to see it in IMAX! Man, this movie was ASS!

Most wretched of the wretched:

Larry the Cable Guy: Health Inspector—the movies I am forced to watch for you people!

The friends I’d most like to have a cuppa with:

Flags of Our Fathers, Strangers With Candy, For Your Consideration, X-Men: The Last Stand

Most radiant performance (in a pretty good movie):

Most radiant (and sexy) performance (in a pretty darn great movie): 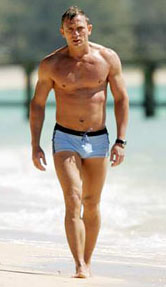 Not only was Penelope Cruz sizzling, but, dear lord, Daniel Craig was a sexy beast as the new James Bond in Casino Royale

Best use of the national anthem:

Shortbus (we can’t really tell you HOW it was used, as this is a family-friendly site!)

The Queen, with Helen Mirren turning to the camera, one eyebrow raised, when the film’s title appears on screen

At the end of C.R.A.Z.Y., the film’s title unspools to reveal a deeper meaning, causing audience to start sniffling yet again

Faster, Pussycat! Kill! Kill! Cool to see on the big screen, but even cooler to meet Tura Satana and get her autograph (OMG! She signed it her picture with my favorite quote!). Her saucy and candid on-stage interview with Peaches Christ had some jaw-dropping anecdotes involving dating Elvis, terrorizing co-stars, being the victim of gang-rape, and most impressive, wreaking awesome revenge for said gang-rape.

Speaking of Loving Annabelle… We’d like to give special recognition to the fans of “LA” (as the frothing obsessed groupies are calling it) for making Vickie’s Loving Annabelle review not only the most-read Moviepie review of the year (if not ever), but also the catalyst of a forum flame war on IMDB (the thread of which has been mysteriously removed) plus plenty of hate, vitriol, and even death wishes (we kid you not!) aimed at the ‘Pie, demanding a public apology for giving the film a negative review. Needless to say, no one apologized.