Apart from being unique, intriguing, and visually striking, there’s something profoundly touching about Lost and Found.
By Jenniferon October 22, 2013
0 Comments
Our Rating 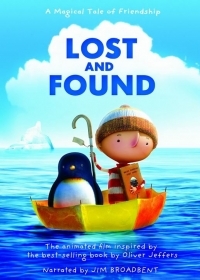 We’ve all had those awkward moments where someone just shows up and won’t to go away. There’s something at once disarming and bewildering about these characters, and they often leave us wondering where the heck they came from and why they chose us. Even so, the fact that they did choose us is oddly compelling. More often than not, this unexplained new figure in our lives eventually morphs into a friend. Such is the case when a little boy wakes to find a penguin on his doorstep in Lost and Found (based on the children’s book by Oliver Jeffers).

Not knowing what to make of this unexpected visitor, the boy assumes the penguin is lost. They’ve certainly never met before, so why else would this funny little bird be at his door? Though somewhat exasperated by the penguin’s presence, the boy commits to returning him to the South Pole, an arduous, beautifully animated journey narrated by the lovely Jim Broadbent. They encounter many dangers in their tiny rowboat, but it’s not until the penguin is safely deposited among his own kind that the boy finally understands why he came into his life: the penguin was looking for a friend.

Apart from being unique, intriguing, and visually striking, there’s something profoundly touching about Lost and Found. At the risk of throwing in a spoiler, I have to say that there’s an embrace between the boy and the penguin that’s so utterly moving that I could cry just writing about it. Much of the poignance lies in what’s not explicitly stated, but in what we (as viewers) are allowed to experience for ourselves. It’s a quiet movie that doesn’t underestimate the intelligence of its audience, much like The Snowman years ago. You won’t see any puppeteers blatantly trying to pull on your heartstrings – you will just feel it happen.

A making-of featurette that’s roughly as long as the feature itself is included on this 55 minute DVD. An in-depth chat with the author and a look behind the scenes help us understand how this adorable book was brought to the screen. 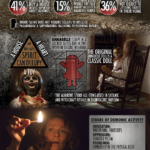 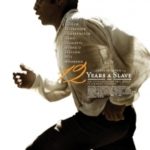